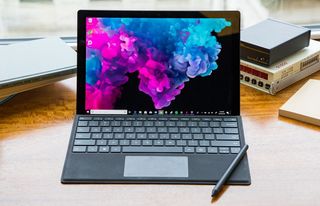 The best laptop deals of the season are upon us as early back-to-school sales are now trickling in.

We're spotting noteworthy discounts on MacBooks and Chromebooks especially, which are among the best laptops for college. Retailers are also offering excellent markdowns on the best laptops from Acer, Asus, Dell, HP, Lenovo, Microsoft and more.

Meanwhile, Lenovo's back-to-school sale currently offers deep discounts on select ThinkPad laptops. For a limited time, you can get the Lenovo ThinkPad X1 Carbon Gen 8 for $1,331 ($888 off) via coupon, "THINKSCHOOL".

If you're on a smaller budget, Lenovo also has the ThinkPad X1 Carbon Gen 7 on sale from $899.

In our Lenovo ThinkPad X1 Carbon Gen 8 review, we praised its slim, lightweight design and brilliant 1080p display. It earned the Editor's Choice award for its fast performance and lass-leading keyboard.

So if you're long overdue for a new laptop for work, school or gaming and want the best price, you've come to the right place. We're listing the best deals on laptops from various trusted retailers.

When you're strapped for cash, scoring the best laptop deal makes easier on your wallet. Keep in mind, there are other variables to consider when you're buying a new notebook.

Deciding which CPU, RAM, GPU and OS configuration best suits your needs can be overwhelming. If you're unsure, read our laptop buying guide to eliminate the guesswork.

That's why we're hand-selecting the best value laptop configurations for every budget from various stores. Whether you're in the market for a business laptop, college laptop or gaming laptop, there's a deal out there just for you.

Here are the best laptop deals you can get right now.