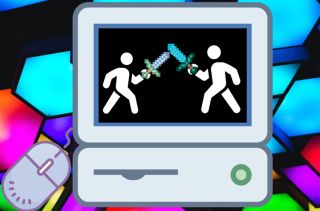 Let’s get ready to rumble!

The “Xbox Series X vs. PS5” battle is intensifying as Microsoft and Sony’s next-gen consoles compete for gamers’ hearts in the countdown to holiday 2020. But while Xbox fanboys and Playstation loyalists face off in the ring of which-gaming-machine-reigns-supreme, I can’t help but look back at how gaming used to be — specifically late '90s PC gaming since I’m a '91 baby.

Don’t get me wrong. I sure as heck don’t miss the unsightly graphics and blocky characters, but there are some heartwarming aspects about '90s PC gaming that sends us skipping down memory lane with nostalgic wistfulness.

Xbox Series X and PS5 may be the future, but here’s what I miss about late 90s PC gaming.

As a single-digit simpleton who indulged in PC gaming in the late '90s, it required skilled gameplay to unlock grayed-out characters or bonus levels, or win access to parts of the game that were ever-so-elusive to me as a snot-nosed little n00b.

Now that the internet is zippier nowadays, some gaming companies thought it was a great idea to slice off meaty parts of the game and sell ‘em off as DLC, which is an acronym for dangling lots of carrots — er, I mean — downloadable content.

Some gamers would argue that DLC is good, it simply adds a cherry on top of a game they’ve already paid for, such as “Witcher 3: The Wild Hunt -- Blood and Wine.” Other DLC, on the other hand, locks you behind a paywall away from meaty elements of the game — and these cases, DLC feels like a soulless cash grab as publishers dangle “expansion pack” carrots in our faces.

A friend of mine pointed to Dragon Ball FighterZ as an example: “Base Goku was a DLC character — the main character of the series in his most basic form was a character you had to buy. That disappointed me quite a bit.” He funnily added, “It’s like paying to go to the movies, but you’ll have to shell out more to watch the Denzel Washington scenes.”

If I recall correctly, PC games were sold as complete masterpieces when I was a kid: no DLC or season passes needed. I miss that.

2. Patching was only something your knit-happy grandma did

“Back in my day,” as seasoned folks would say, a PC game had to be completed by a certain date, and once those retail discs hit store shelves, it was a foregone conclusion that consumers were buying the entire title. And if the game was lacking or needed a little extra polish, all developers could do was suffer feelings of irreparable failure.

You had one chance to get it right, and if you didn’t — well, tough noogies.

Now, some of us must stomach multi-gigabyte day-one patches. Not that I’m complaining; some patches are needed to fix a little bug here and there, which makes for smoother gameplay. However, in other cases, we can’t shake the feeling that some developers take advantage of day-one patches to rush an unfinished game to market because they know they can just “patch it up” later. And what about gamers with no internet access who’ve purchased a game? Are they stuck with an unfinished project because they can’t download those darn patches? That’s not fair in the least.

3. The PC game boxes of the '90s were big and beautiful

PC game packaging in the '90s looked like mini treasure boxes filled with gaming gold. Some had beautiful embossing that I could run my fingers over. Bet you can’t do that with your Steam digital library. Others, like Tomb Raider’s PC games, even came in trapezoid-shaped cardboard boxes — when was the last time you’ve seen that?

You can always head to GameStop or your local mom and pop shop and purchase a disc version in a DVD-style box. But it is not the same as the creative, gift-like boxes that came with custom CD holders, product manuals, colorful strategy guides and more. Yes, digital libraries and today’s slim game packages save us a ridiculous amount of space in the physical world, but guys — this is nostalgia, not logic.

4. There was no internet dependency in '90s gaming

When I tried to install my physical copy of Dishonored on my laptop — without the internet — an error message spat out a more sugarcoated version of “Wi-Fi or die!”

I remember the days when I’d pop a game like Where in the USA is Carmen Sandiego? into my bulky, hideous Gateway PC, and I didn’t need the internet. I’d just install it and be whisked away into the shoes of a newbie detective.

Voila, now you’ve typed in a PC cheat code that’s made you invincible. Welcome to God Mode. I remember cheat codes were quite prevalent in '90s PC gaming and I’d slither onto the internet to find some sweet combos to help me gain some advantage. Some '90s gamers might have been too holier-than-thou to plug in cheat codes, but I sure wasn’t — I was a sinner and I enjoyed it. I was also terribly awful at gaming and I wouldn’t live to see level 12 if I didn’t use a skip-level cheat code.

As it turns out, according to Vice, not all developers embedded cheat codes into games because they had a soft spot for crappy gamers like myself — they used cheat codes to test and debug later parts of the game. Some didn’t remove the codes for fear it would disrupt the game in some way.

Cheat codes still exist today, but they’re not as prevalent as they were back then — it’s now much easier to remove debug modes before it gets into the end users’ hands.

6. Point-and-click games peaked in the 90s

Some say point-and-click games — which had their peak in the '90s — are boring and understimulating, which is understandable for gamers who prefer bloody combat, hack-and-slash gameplay and exciting, action-filled games. But for me, I don’t always want to be at the edge of my seat with a gun in hand — sometimes, I want to kick back, relax and enjoy a fascinating story with brain-warping puzzles sprinkled in.

Grim Fandango, which follows a skeletal salesman who rescues a newly-deceased woman during her trip to the afterlife, is a strange mix of Day-of-the-Dead character design with an Art Deco, film noir feel. It’s hilarious, the voice acting is intriguing and the puzzle aspect will awaken your mind. First-person shooters is always a favorite — even in the '90s — but back in the day, game developers such as LucasArts (the mastermind behind Grim Fandango) helped put point-and-click games on the map. Point-and-click was more appreciated back then — I miss that.

7. You could get free PC games from cereal boxes in the '90s

Know what makes a bowl of Frosted Flakes even more delicious? An accompanying PC game that had no business being in your cereal box. In the mid-90s, there was a wave of cereal companies offering free PC games to consumers. General Mills, partnering with Hasbro, was the leader of here’s-a-free-PC-game-in-your-cereal-box marketing — consumers were able to collect full-version PC games of popular board games such as Clue, Candy Land and Sorry!

Heck, at one point, you could even find amazing titles such as Rollercoaster Tycoon and Age of Empires. Now, in this day and age, all you’ll get from a sugary cereal box is a risk of diabetes.

Oh, how I loved snapping out the CD from its case and clicking it into place on the drive. I’d press a button that would retract the CD back into the computer tower. I'd listen to the motor hum and whir as the PC read the game. Then, my bulky computer would initiate installment. It was all so darned satisfying.

Hard copies still exist, but with disc drives disappearing from laptops and digital libraries becoming more ubiquitous, can you blame me for missing how tangible PC games used to be?

Whether you got lost in conversation-tree games such as Grim Fandango, yelled “gotcha!” while playing Quake 2, or channeled your inner detective with Where in the USA is Carmen Sandiego?, '90s PC gaming was a part of countless childhood memories.

Would I hop into a time machine and choose to live in the '90s gaming era permanently? Not a chance. I’m elated about Xbox Series X and PS5 engineers pushing the envelope of rendering techniques to make gaming more true-to-life but can’t we reminisce —  just an insy, winsy bit —  (albeit with rose-colored glasses) about the memorable moments we missed about old-school gaming?

If you’re feeling nostalgic, check out our best gaming laptops and best cheap gaming laptops pages to play some of your favorite remastered '90s games.