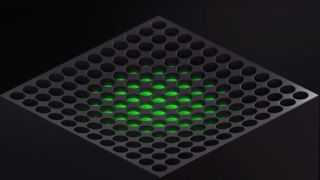 Next-gen consoles arrive later this year, but there is so much Sony and Microsoft aren't telling us about the Xbox Series X and PlayStation 5.

Of the two rivals, Microsoft has been far more forthright about what to expect from the Xbox Series X when it launches this holiday season. But analysts and armchair-speculators are convinced that Team Green has something up its sleeve that we don't know about: a second, cheaper and less powerful console.

Multiple credible reports (Windows Central, Kotaku, The Verge) all but confirmed the existence of this mysterious entry-level model, nicknamed Xbox Lockhart. Now we have more concrete evidence in the form of a rogue benchmark score.

Leaker _rogame spotted what could be Lockhart's accelerated processing unit, or APU. Consisting of a 4.0-GHz octa-core processor with 16GB of GDDRX memory (12GB RAM, 4GB of VRAM) and an unknown GPU, the APU delivers between 7.0 and 7.9 teraflops based on leaked benchmark results, German tech site WinFuture speculates. That's much higher than the 4-teraflops other outlets have reported, so take this with a grain of salt.

Digging deeper into the benchmarks, this unknown APU scored 7,100 points on the 3DMark Time Spy test, which puts it in line with a Ryzen 9 3900X CPU paired with an Nvidia GeForce GTX 1660 SUPER GPU, as Notebookcheck points out. We know Microsoft will employ AMD GPUs in its next-gen consoles; This score sits right around what the Radeon RX 5600 XT achieved.

Of course, these numbers are all speculation. Microsoft hasn't even acknowledged the existence of a second Xbox console, choosing instead to focus on the flagship Series X, which the company claims will produce 12 teraflops of power.

Another interesting nugget coming out of this leak is that leaker _rogame refers to the entry-level 2020 Xbox as the Xbox Series S.

That name would align with the current Xbox naming scheme wherein the Xbox One X is the most powerful and expensive console while the Xbox One S is a notch below. Again, this is just a rumor, but we think it makes sense for Xbox to go that route.

If you want to learn more about next-gen consoles, see our Xbox Series X and Playstation 5 rumors hubs.