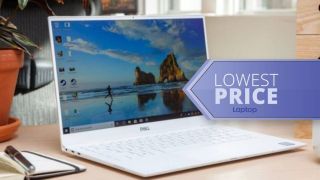 If you don't mind buying a last-gen device, then you could have hundreds on one of the best laptops ever.

This is the lowest price we've seen for an XPS 13 with a 4K display. In fact, it's one of the cheapest 4K laptops around.

In our XPS 13 review, we named this 2019 edition the best ultraportable laptop for its sleek design, fast performance and gorgeous 4K and 1080p displays.

A newer model with 10th Gen chips was released a few months ago, but this 8th Gen-equipped version has plenty of performance for all but the most demanding power users.

The main highlight of this specific XPS 13 model is its 4K display. We were awestruck by the panel's rich colors, sharp picture and blinding brightness. Yes, it takes a toll on battery life but the 4K XPS 13 still endured for nearly 8 hours on our test.

The on-sale model was the first XPS laptop with a properly-placed webcam and an InfinityEdge display, so don't worry about looking foolish when you're video-chatting.

We suspect this 4K XPS 13 is on supersale because it won't be around for much longer. Our advice? Jump on this deal while you can.