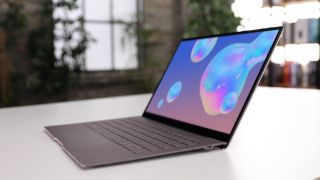 The company announced today that the wafer-thin laptop is available for pre-order in the US. The Galaxy Book S costs $999; It will ship and be available at retail stores on Feb 13.

You can pre-order the Galaxy Book S today at Samsung.com, although the link isn't live as of writing this article. To sweeten the deal, Samsung is giving eligible customers $100 credit toward any Samsung PC, tablet or accessory if they purchase the Galaxy Book S between Jan 30 and Feb 12.

We went hands-on with the Galaxy Book S when it was announced in August last year. The slim laptop made such a strong impression on us that it felt like a possible turning point for a company that has historically struggled to stand out in the market.

The Galaxy Book S promises to be the ultimate road warrior, with its incredibly thin design (2.2 pounds and 0.5 inches thick), LTE support, and epic 23 hours of rated battery life. We were also really impressed by the laptop's 13.3-inch, 1080p display, which looked bright and vivid in the brief time we spent with it.

But that could all be undone if the 2.8-GHz Qualcomm Snapdragon 8CX processor and 8GB of RAM aren't powerful enough for everyday tasks. That's something we'll have to test once we get a review unit, which should be very soon.