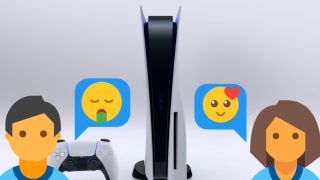 What do you get when you cross the PS5 reveal and social media? Savage console roasting, of course.

Luckily, the PS5 is a heart-free, hunk of hardware because when Sony finally unveiled the PS5 at the record-breaking Future of Gaming virtual event, the internet exploded with hilarious tweets, cruel memes and opinionated commentary about PlayStation's new futuristic WiFi router -- er, I mean -- console.

What are people saying about the PS5 reveal?

Well, it's difficult to determine the public's consensus on the PS5 when Twitter is flooded with taunting pictures of black modems sandwiched between white pieces of paper.

Tell me why the New ps5 looks like an internet router pic.twitter.com/61XXLJFyrMJune 12, 2020

But after sifting through some Internet discussions, it's clear that the PS5 console design has garnered mixed reactions from gaming fans. There seems to be a prevailing "I like it, but ... " statement among those who have voiced their opinions on the PS5.

I love this design but it kinda looks like a Nintendo Wii cosplaying as a vampire #PS5Reveal pic.twitter.com/kT1a4dMxatJune 11, 2020

The outry for a black PS5 console

It's also worth noting that Twitter user Ameen is not alone in his preference for a black design; many gaming fans seem opposed to owning a mostly-white console. Digital artists couldn't wait to splash a midnight-black coating on the PS5 console for a more visually pleasing (for some) look, and a great number of social media users gushed at the darker motif.

But there are gamers who truly love the PS5's divisive design as is -- they dig its stylish, funky, Star Wars' Stormtrooper sci-fi vibes. Those who dislike the PS5 console, on the other hand, voiced that they would have preferred a more discreet, minimalist design -- some are particularly perturbed by the disc-drive console (there are two PS5 models, one is a digital-only version) due to its asymmetrical appearance.

Other PS5 faultfinders seem to be Xbox loyalists who have been dying to get back at the PlayStation fanbase for calling the Series X a refrigerator.

We've already discussed the WiFi router jokes, but here are some other hilarious memes gaining viral traction on Twitter.

The memes are strong but I really love this one#ps5 #YuGiOh #PlayStation5 pic.twitter.com/qSEWpOF3k5June 12, 2020

Teasing is par for the course for console reveals: the Nintendo Switch was called a toaster, the Xbox Series X was dubbed a mini fridge, and now the PS5 is facing the spotlight with its router-like design.

All jokes aside, many people will still purchase the console this holiday season despite being apprehensive about the PS5 design. Many have expressed that they don't care about how the PS5 looks -- as long as it doesn't sound like a jet engine (like the PS4 Pro) and offers mind-blowing performance.