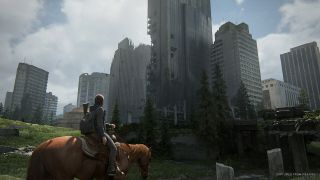 The PS5 and Xbox Series X feel so far away, and even though they're going to be shipping this holiday season, we haven't yet seen what the PS5 looks like. What we have seen is every kind of rumor imaginable, and lately, developers have been talking up the PS5's graphics.

"Smoke, water, wind – things like that are great for GPU processing," Straley said. "It’s always been really difficult to make really good hair. And then hair responding to different environments – hair and water, hair and wind, hair and hair gel, are all reactions that can be processed."

We've all seen that gross pile of mush on a character's head. Well, that's not necessarily the developer's fault. Rather, it's a limitation of the hardware they're using.

Straley briefly talked about the limitations his team faced because of the hardware at the time. "In The Last Of Us, we had an ambient shadow system which we had to down-res significantly, and it sure would be great if we could do that at a higher resolution and get more fidelity in it," he says. “Something like this makes that more possible."

There's more information in IGN's report that is definitely worth reading. But, one more key takeaway is from Bryant Cannon, lead developer at Night School Studio, the studio behind Oxenfree and Afterparty.

Cannon talked about how, in Afterparty, each AI would walk around the bar drunk and do a bunch of random actions. His original idea was for each AI to have their own drunkenness and have their actions reflect that, but current hardware couldn't handle it.

"We realized that a, it wasn't that important to the gameplay to have everything simulated like that. And b, it was having a pretty big effect on our performance, and the frame rate was suffering because of it. So we decided to scale that down," he said. "But if we were to make this game on the Xbox Series X or the PS5, then maybe we would've been able to have all of that simulation playing out [without sacrificing performance]. Even though it didn't have a big effect on the gameplay – it was more of an aesthetic thing – it would have made the bar feel even more alive and dynamic."

It's design choices like this that will affect how games are shaped on PS5 and the Xbox Series X. However, while their GPUs will offer new capabilities, once the ceiling is raised, developers will only want to get past the next ceiling. The graphics in the PS5 and Xbox Series X will definitely be beneficial to developers regardless, and we're excited to see what they come up with.