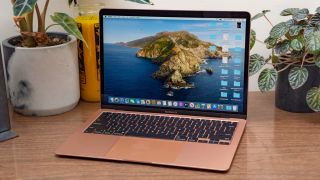 Apple's reliance on Intel to produce chips that power its MacBook laptops (like the MacBook Air 2020) could soon come to an end. Several new custom ARM-based MacBooks are scheduled to arrive next year, according to reliable analyst Ming-chi Kuo (via MacRumors).

The in-house processors will find their way into upcoming MacBooks models as well as iMac desktops. Kuo says switching to ARM will give Apple a leg up on the competition by reducing its processor cost by 40% to 60%.

Controlling the supply of processing units will also give Apple a tighter grip over its hardware — something the company has enjoyed for years with the iPhone and iPad.

Apple has already proven its ability to produce a chip that competes with Intel and AMD on performance and efficiency. The A12Z SoC inside the latest iPad Pro outperforms the majority of premium laptops we've teste while delivering more than 10 hours of battery life.

On the other hand, ARM-based CPUs have struggled to make a dent in the market. Positioned as a low-cost, more efficient alternative to Intel and AMD processors, ARM chips don't deliver enough power for anything beyond basic computing needs. Apple will look to break new barriers, and the brawny A-series processors in the iPad could be right for the job.

Apple has long been rumored to be looking for a way out of its tenuous relationship with Intel. About a year ago, Tim Cook blamed the chipmaker for slumping Mac sales citing Intel's well-documented processor shortages. On top of supply bottlenecks, Intel has faced harsh criticism for failing to shrink its CPUs.

Those troubles don't appear to be ending anytime soon. Intel CFO George Davis admitted that 7-nanometer chips won't arrive until the end of 2021. With AMD and others further ahead in the development process, it could take Intel nearly two years to catch up or reach parity with its rivals.

As AMD resurges and Apple readies the troops for battle, Intel could quickly itself in a very difficult position.

If Apple ditches Intel, it will need to find a replacement for Thunderbolt 3. Every MacBook in Apple's current arsenal relies on a Thunderbolt connection, but the Intel-developed hardware interface is available only on laptops with Intel CPUs.

Apple will reportedly sidestep this problem by using USB4, a new interface that merges the Thunderbolt and USB protocols. USB4 will enable 40 Gbps transfer speeds and support up to two 4K displays or one 5K display.