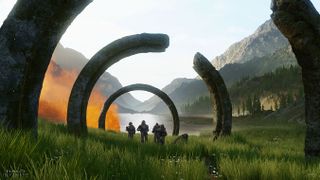 Halo Infinite might not be the final journey for Master Chief as a new job listing suggests another game in the franchise will arrive on Xbox Series X.

The listing, found on Microsoft's careers page, asks for a senior producer to "help develop a new project in the Halo Universe." This phrasing suggests the next game could be a spin-off, but it's possible we're looking at the groundwork for a direct Halo Infinite sequel.

Taking a closer look at the posting, Microsoft is on the hunt for a senior producer in 343 Industries to "drive feature and systems creation, specs, planning and execution." Furthermore, this person will manage development issues and address the problems they've identified with "creative solutions." This is quite an important role from the sounds of it, which suggests the game is still a long ways out.

In terms of experience, Microsoft wants someone who has worked at least 5 years in game development doing senior-level work and has been at least 8 years in the games industry.

We don't know what type of game is being planned or how it will tie into the Halo franchise. There's no point in speculating, either. There have been multiple Halo spin-off games released over the years, many of which weren't even first-person shooters like those in the two main trilogies. For example, the 2017 game Halo Wars 2 is a real-time strategy game, while Halo: Spartan Assault (2013) is a twin-stick shooter.

The Halo universe is so flexible and beloved, Microsoft and 343 Industries have the freedom to cook up any type of game they want.

What about Halo Infinite?

Halo Infinite is currently on track to be released later this year as a launch title for the Xbox Series X. Halo is one of the most iconic franchises in video game history, and a crucial IP when it comes to the success of Xbox. It's no surprise that Microsoft wants to get a jump start on the next game, even while Infinite remains in development.

Halo has a large, unwavering fanbase so Microsoft isn't taking much of a risk by green lighting a project before assessing the success of the previous one. If it lives up to the hype, Halo Infinite could break sales records and be a top seller for years to come. So why not make another Halo? I know I'm not complaining.