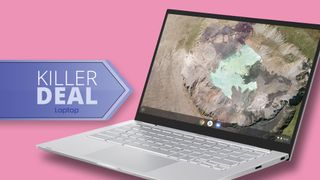 If you're looking for a Chromebook but don't want to settle on a heap of junk, then we've got a Black Friday deal for you. Walmart is selling the Asus Chromebook C425 for just $329 after a $120 discount.

The specific model on sale has a 14-inch, 1080p display along with an Intel Core m3-8100Y CPU, 4GB of RAM and 128GB of eMMC flash storage. Those are great specs for the price, especially when you factor in the Chromebook C425's modern design and backlit keyboard.

Asus Chromebook C425: was $449 now $329 @ Walmart
This deal gets you a modern Chromebook at a very low price. Asus' Chromebook C425 flaunts an edge-to-edge 1080p display and packs a generous 128GB of storage. View Deal

We haven't reviewed the Chromebook C425, but we have reviewed its more premium sibling, the Asus Chromebook Flip C434, which is the best Chromebook you can buy. On paper, the Chromebook C425 has a lot to offer for the price. It starts with the design, which flaunts a 14-inch, 1080p display with narrow bezels, a feature you typically find on premium devices.

On the inside, this Chromebook C425 packs an Intel Core m3-8100Y CPU, 4GB of RAM and a 128GB eMMC drive. That should be plenty of power to run everyday tasks, like browsing the web with multiple tabs open, streaming videos and even some lightweight photo editing.

Walmart is offering this discount on the Chromebook C425 as a Black Friday special, so the savings could disappear at any moment.