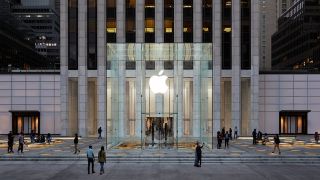 One of Apple's senior executives reportedly told employees that Apple is anticipating "many more" of its stores will open in May.

Anonymous Apple retail employees spoke to Bloomberg, which reported that Deirdre O'Brien, vice president of retail and people, said, "We are continuing to analyze this health situation in every location, and I do expect we will reopen up many more stores in May."

It's unclear when exactly Apple's stores are expected to open, but O'Brien reportedly told employees that she believed some US stores will reopen in early May. Of course, this could be mere speculation, but it's worth noting.

Apple stores in China reopened in March while retail locations in Seoul reopened in early April. Meanwhile, in the past couple of weeks, Apple retail staff have been conducting training and meetings remotely.

Early this month, Bloomberg reported that Apple CEO Tim Cook told employees that when it's time to reopen, they will likely implement social distancing measures, temperature checks and even possible coronavirus testing.

In terms of production, the Wall Street Journal recently reported that the production of Apple's iPhone 12 could be delayed by an entire month due to the pandemic. We're not exactly in the phone business here at Laptop Mag, but if Apple's phone production is being stunted, its laptop production could be affected too. I can feel a couple of coworkers weeping in our virtual office.