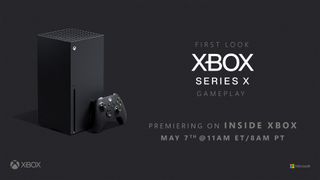 While Microsoft has shared virtually everything there is to know about the Xbox Series X hardware, we will finally get to see what games will look like on next-gen hardware early next month.

Microsoft revealed that it will host a special Inside Xbox stream on May 7 at 11am ET that will feature a first-look at Xbox Series X gameplay from a number of different titles (via The Verge).

The official Xbox account fired off the first tweet announcing the event, indicating that we will be seeing "next-gen gameplay from our global developers partners." There were no specifics regarding which studios will be showing off footage.

We did, of course, get the official trailer for Assissin's Creed Valhalla earlier this morning, but that was cinematic footage and not actual gameplay.

The GM of Xbox Games Marketing at Microsoft had a quick follow on to the announcement indicating that "Xbox Game Studios teams are hard at work on some big summer plans."

So pumped to see our partners showing us a first look at Xbox Series X gameplay next week! Also know the Xbox Game Studios teams are hard at work on some big summer plans. More details soon! #GetHyped 🙌🏻🙅🏼‍♂️🔥 https://t.co/VXXsZnUYX5April 30, 2020

This suggests that we won't be seeing the Xbox Game Studios titles at the event on May 7, with those games being slated for an event later in the summer.

Regardless, it's going to be exciting to finally see a real demonstration of what the Xbox Series X hardware is capable of on May 7.