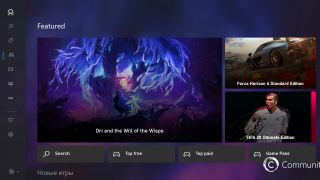 The Xbox Series X is right around the corner, and it is likely to arrive with a brand new version of the Xbox Store. The new Xbox Store redesign, codenamed Mercury, was apparently leaked this week by @wincommunity on Twitter.

The new Xbox Store, if this is, in fact, legit, looks incredibly similar to how the PlayStation Store is currently set up, with the important tabs on the left-hand side and all of the selectable results on the right-hand side.

Alongside the images posted by @wincommunity is a hands-on preview with the actual app. The clip, which we'll link below, was posted by Executive Editor of BWW Media Group, Brad Sams. The video shows most of the accessible areas within the current build, such as the tabs for Featured games, movies and apps.

It's all pretty standard, but what's really surprising is how quickly everything loads and how clean the interface is. It gives us a good idea of how seamless the Xbox Store could be on the Xbox Series X.

In the Xbox Game Pass section, YouTuber Brad Sams was able to click on Ori and the Will of the Wisps and simply hit install on the game. In contrast, you have to go through several hoops on the Xbox One to actually get to the game -- not to mention the longer loading times.

If we actually do see this version of the Xbox Store come to life, It would be a much needed improvement over the current system.