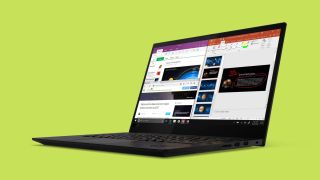 These laptops are meant for business users or content creators who need powerful, desktop-level computing performance and discrete graphics cards for 3D rendering, 4K video editing and other demanding tasks. To eke out the last drop of performance from these notebooks, Lenovo created a new feature called Ultra Performance Mode. When enabled, the workstations will ignore restrictions on acoustics and temperatures to drive as much power as possible.

Between these five new laptops, Lenovo is offering a variety of high-end options to choose from. We're going to break them all down so you can decide which one is best for your needs.

Price and release date for 2020 ThinkPads

Let's start by going over the pricing and expected release date of these laptops. The ThinkPad X1 Extreme will start at $1,749 when it gets released in July.

If you need a Xeon CPU, the ThinkPad P1 will also be available in July starting at $2,019.

Given their components, it's no wonder the ThinkPad P15 and ThinkPad P17 are even more expensive, coming in at $1,979 and $2,119, respectively. These two laptops will also arrive in July.

And finally, there is the new ThinkPad P15v, a more wallet-friendly option that will go for $1,349 when it gets released next month.

If the XPS 13 is equivalent to the ThinkPad X1 Carbon, then the ThinkPad X1 Extreme is a direct rival to the XPS 15. It's a thin and lightweight 15-inch laptop that delivers loads of power. This new 3rd Gen version gets upgraded chips, and can be equipped with up to a 10th Gen Intel Core i9 vPro CPU.

The maximum amount of RAM it can carry remains at 64GB but the storage got a major boost from 1TB to up to 4TB via two 2TB SSDs. On the graphics side, the X1 Extreme uses an Nvidia GeForce 1650 Ti GPU. It's a step down from the RTX chips in premium gaming laptops but it should provide a good balance between performance and efficiency.

On that note, Lenovo puts the X1 Extreme's battery life at 14 hours, but we're skeptical of that rating considering endurance has not been a strong suit for this laptop in the past.

Just like the previous model, you have four display options to choose from. It starts with a standard 15.6-inch, 1080p display with up to 300 nits of brightness and goes up to a 4K OLED touch panel with HDR 500. There is also a 4K anti-glare panel that gets up to 600 nits of brightness.

We haven't gotten our hands on this new version but images provided by Lenovo suggest the design hasn't changed much. It's a sleek machine with the iconic ThinkPad look, a generous assortment of ports and plenty of security features (fingerprint reader, IR camera, webcam cover).

The ThinkPad P1 is similar in many ways to the X1 Extreme in that it's a surprisingly portable machine given the components it packs. The new P1 takes things up a notch with its 10th Gen Intel Xeon CPUs and Nvidia Quadro T2000 GPU, a pair of chips designed specifically for workstation laptops.

You can configure this machine with up to 64GB of RAM and up to 4TB of storage. There are several display options, from a 1080p panel with 300 nits to a 4K OLED screen.

New to the P1 this year is an anti-smudge coating to reduce fingerprints (an issue we've had with other ThinkPads), and upgraded speakers for improved sound. Among those display options I previously mentioned is a new 4K display with 600 nits of brightness. Like the X1 Extreme, the P1 receives Wi-Fi 6 support, but also comes with optional LTE WWAN.

The P1 has the beloved ThinkPad keyboard, just like the X1 Extreme, but this one is spill-resistant. Another difference is that the P1 can run on various operating systems, including Ubuntu Linux, Red Hat Linux and Fedora Linux (along with Windows 10 Pro).

Now we're getting into the laptops you think of when you hear "workstation;" The ThinkPad P15 and P17 trade portability for raw power. Successors to the ThinkPad P53 and P73, these two machines were redesigned with a new thermal system for significantly improved airflow. This should keep them cool as they power through demanding workloads, even with the new Ultra Performance Mode enabled.

The ThinkPad P15 and P17 are also more modular, so you can upgrade parts as needed. Lenovo says there will be four times more CPU and GPU configs than before, allowing you to pick and choose to get the perfect performance/price ratio for your needs.

So, what's powering these beasts? You can configure them with up to a 10th Gen Intel Xeon CPU, up to 128GB of RAM and up to 4TB of storage. Graphics gets a huge boost and now goes up to the beastly Quadro RTX 5000 GPU. Another change upgrades the battery of these two notebooks to 94WHr, although Lenovo didn't give us a runtime rating.

And finally, there is the all-new ThinkPad P15v, a more affordable option for those who don't need the slimmest design or fastest performance from a workstation. That said, this new laptop still packs 10th Gen Intel Xeon CPUs and up to 4TB of storage. RAM is limited to 64GB and the GPU inside the P15v is an Nvidia Quadro P620, an entry-level workstation card.