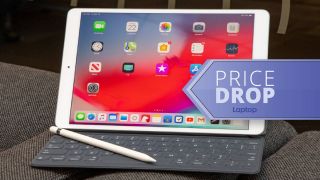 Outside of the holidays, the iPad Air rarely goes on sale. However, if you're looking for a price break on a new Apple tablet, then today is your lucky day.

It's also $10 cheaper than Walmart's price and one of the best tablet deals you can get right now. This iPad price drop arrives hot on the heels of iPadOS 14 rumors.

In our Apple iPad Air review, we praised its big, beautiful display, long battery life and fast, A12 bionic chip. Although it lacks 2nd-Gen Apple Pencil support, we gave it an overall rating of 4.5 out of 5 stars.

The new iPad Air sports the familiar machined aluminium design of Apple's family of tablets. It supports Apple Pencil (1st Gen) and the Apple Smart Keyboard cover, both of which are sold separately.

When it comes to performance, the iPad Air's A12 Bionic processor delivers ample speed for creative apps like Procreate and Pixelmator Photos. The iPad Air's large screen and access to a broad range of iOS games make it one of the best tablets for gaming.

The iPad Air lasted 11 hours and 54 minutes on our Laptop Mag Battery Test. So if you're looking for the cheapest iPad Air you can get right now, then take advantage of this deal.