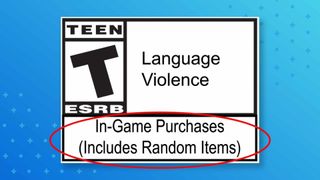 It's been two years since the Entertainment Software Rating Board (ESRB) added the designation "In-Game Purchases" to its labels for games that included the ability to purchase additional content without leaving the game. Today the organization is adding another designation for "Includes Random Items" (via PCGamesN).

While loot boxes are going to be the primary example, the ESRB wanted the language to be inclusive of other types of random content in games. Interestingly, a survey revealed that less than one-third of parents knew what a loot box, proving how unhelpful the term is as a warning.

So let's take a quick look at what the new designation actually is meant to include. The broad definition given is any game that features a component that allows the player to buy an item that is unknown to the user at the time of purchase using either real-world or in-game currency that can be bought with real-world currency.

Again, the classic example is a loot box where the player either buys the box itself or the ability to open the crate to retrieve random items.

The advantage of the ESRB language is that it then also includes things such as, "gacha games, item or card packs, prize wheels, treasure chests, and more." Given the prevalence, profitability, and countless variations on this mechanic it isn't surprising to see the ESRB look for a solid catchall label and to address this slightly faster than it did in-game purchases in general.

While it's good that the ESRB is addressing this, it also feels like the "Includes Random Items" description is still going to be lost on many consumers and given how widespread the usage of these kinds of items are it is going to be on so many games that it becomes easy to