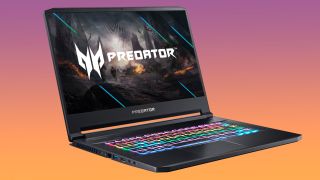 Update April 22: Acer announced that the Nitro 5 will also be available with AMD Ryzen 4000 mobile processors up to the Ryzen 7 4800H, an octa-core CPU. The GPU of this model, unfortunately, will be limited to the Nvidia GeForce GTX 1650 Ti.

Acer just announced updates to its Predator Triton 500 and Nitro 5 gaming laptops, which feature some of the latest hardware from Intel and Nvidia.

First up let's take a look at the Acer Predator Triton 500, which is a beast of a gaming laptop in a remarkably thin form factor. The Predator Triton 500 has a 10th Gen Intel H-series processor and can be powered by either an Nvidia GeForce RTX 2080 Super or RTX 2070 Super with Max-Q Design. The power and efficiency balance from Max-Q allows it to still offer up to 7.5 hours of claimed battery life, which would be more than double what we saw from its predecessor in our tests.

The display is arguably the most compelling feature of the Predator Triton 500. It's a 15.6-inch, 1080p panel with a 300Hz refresh rate, 3ms response time and Nvidia G-Sync. Acer claims it offers wide-angle views and displays 100% of the sRGB color gamut, which we'll test in our full review. You can opt for up to 32GB of DDR4 memory and a 2TB NVMe Raid 0 SSD.

The Predator Triton 500 has roughly the same dimensions this time around at 0.7 inches thick, but it lost some weight, dropping to 4.63 pounds from its previous 4.8 pounds. The overall design remains reasonably subtle, but the keyboard now supports per-key RGB lighting.

Support for Wi-Fi 6 is a nice additional, as is a redesigned Acer Vortex Flow cooling system. The occasionally loud fan noise was one of our complaints with the previous model, so the claimed 33% thermal performance improvement is excellent news.

While it may not have the power of the Predator Triton 500, the updated Acer Nitro 5 looks like a solid affordable gaming laptop thanks to some nice changes from the previous model.

The Nitro 5 also features a 10th Gen Intel processor with GPU options ranging from the Geforce GTX 1650 up to an RTX 2060 (sorry, no Super).

The most notable change for the Nitro 5 is the move to a 15.6-inch screen from the previous 17.3 inches. This also includes a dramatic improvement in the screen tech with 120Hz or 144Hz refresh rate models available with 3ms response times. Acer is also claiming a 300-nit panel, which would be a slight jump up from the 275-nits of last year's.

The exterior design is slightly flashier this year with a splash of red for the fin on the rear of the laptop. This replaces the more subtle red hinge from last year. Inside the keyboard is the same red backlighting so the laptop maintains the overall black and red design.

The Nitro 5 also picks up Wi-Fi 6 this year, a nice future-proofing feature for a more budget gaming laptop. It has also undergone some thermal improvements with a dual-fan system, additional heat vents and exhaust ports offering a 25% improvement over the 2019 version.