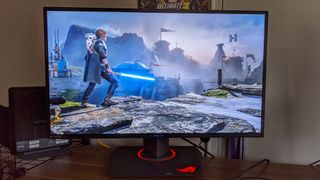 Over the never-ending Black Friday and Cyber Monday week, I made my wallet and my girlfriend very angry when I pulled the trigger on the best gaming monitor deal I saw that week.

This wasn't just any old gaming monitor, it was the Asus ROG Swift PG279QZ. Unfortunately, we didn’t get to review this one, but several publications claimed that it's one of the best gaming monitors around. And, honestly, I didn't feel comfortable playing a gorgeous game like Star Wars Jedi: Fallen Order on my crappy 60Hz monitor.

I've only spent several days with this 165Hz monitor, but I can tell you right now, I'm never going back to a low-refresh rate screen ever again.

To be clear, I wasn't just looking for any gaming monitor on sale over Black Friday. I was specifically eyeing the Asus ROG Swift PG279QZ and patiently waiting for it to drop. The original price was $600, all for a 27-inch monitor that boasts a 1440p resolution and a 165Hz refresh rate (when overlocked) along with Nvidia G-Sync compatibility, which helps minimize screen tearing.

I saw it drop to $500 on NewEgg, and then to $480 at MicroCenter, but I didn't really want to bite just yet. Except, I ended up having a dream about buying it at MicroCenter, and then convinced myself when I woke up that I would buy it that day. But that's when I saw the $450 deal on Amazon, and I just said, "Screw it," and snagged it right then and there. It's a good thing I did because it's sold out on Amazon right now.

Thanks to Amazon Prime, I got my monitor within just two days after purchasing it. I also ordered a DisplayPort cable with it, because you can only get the high refresh rate when using a DisplayPort. To my surprise, a DisplayPort cable comes in the box, so now I just have an extra cable lying around, which is not a bad thing.

The Asus ROG Swift PG279QZ came with a DC adapter (obviously) and a USB 3.0 Type-A-to- Type-B cable, but there was no HDMI cable, which was a little odd. I wouldn't be using an HDMI cable anyway, but since the monitor does have an HDMI port, it should at least come with the cable.

One thing I don't like about my monitor is that I can't adjust any of the settings via software; instead, I have to physically mess with the buttons on the right side of the panel. It's even more frustrating for me because I have a two-monitor setup and the buttons are sitting at the center of my setup. Which means I’m just scraping my fingers against both of my monitors to adjust the settings.

That's not even the worst part. Let's talk about the bane of my existence that is this monitor's GamePlus functions. Asus' GamePlus software lets you do one of three things: add a crosshair, set a timer or place an FPS counter on-screen. You can do only one of these at a time, which seems like a missed opportunity. But worst of all, once one of these functions are enabled, there’s no way to disable it. I had to reset my monitor settings to get rid of it on screen. This should not be a thing. Why is this a thing?

When it came to the display, I noticed right away that the colors were a little too warm. The monitor offers six display presettings: Scenery, Racing, Cinema, RTS/RPG, FPS and sRGB. Racing looked the best to start, but I cranked the brightness up to 100. I kept the contrast at 50 because turning it up would wash out everything, and turning it down would just make things dark and not improve the contrast. It's the worst kind of contrast setting in that it actually doesn't make the colors deeper or bolder in anyway.

There are also color presets, such as Cool, Warm and Normal, as well as a customizable User Mode, which is where I turned down the Red and Green by 3 points from 100 to balance out the color a bit. This mode also gave the display a better white balance. The only real issue I have with the color, apart from being a tad warm, is that the blacks aren't as deep as they could be and there's no setting that could help me fix that.

If you're using a DisplayPort, you'll naturally get 144Hz, but you can overclock the display to 165Hz, which took me awhile to figure out. You need the Nvidia Control Panel app to enable it.

However, you might not want to do that anyway. I've noticed some serious stuttering in-game only after I overclocked my panel. Ultimately, the extra 21Hz is pretty useless to me — I can live with 144Hz.

Gaming: These frames mean I'm better than you

So far, I've been tearing my way through Star Wars Jedi: Fallen Order on the hardest difficulty, and I love every second of it, especially on my supersmooth 144Hz monitor. My Nvidia GeForce GTX 1070 GPU can handle Jedi: Fallen Order at max settings, but it would get up to around 80 frames per second. So, to be fair, I'm not fully utilizing my new high refresh rate. However, there's still a noticeable difference from 60Hz.

The speed of my lightsaber attacks and just the way Cal moves in the cutscenes looks and feels incredibly immersive, as if I’m experiencing this firsthand as a participant instead of an observer. I was also impressed by the color and brightness of the panel, as my blue lightsaber looked bold and fierce. In general, the panel was blindingly bright, especially compared side by side with my cheapie monitor.

In a game like Call of Duty: Modern Warfare, graphics don't matter as much as fps, so I cranked some of the settings down, and even lowered the resolution to 1080p. I was getting around 130 fps, and, hot damn did it look as smooth as butter when I started cutting down fools with my 725 shotgun. And because I had more frames to work with, I had a slight advantage when players popped around a corner, because you best believe I'd see them before they saw me.

Divinity: Original Sin ran like a charm, using the whole 165Hz refresh rate of my monitor to make the game run as fast as my display could possibly work. Everything looked that much more immersive, from the way the waves crashed upon the shore to how smooth the characters moved from place to place when I pointed and clicked.

Streaming performance: Oh, I should probably keep writing this article

I've mostly used this monitor for gaming so far, but when I picked up where I left off in the Expanse, I had to use all of my effort to take my eyes away from the screen so I could continue writing this. The hair on Naomi's head was incredibly sharp, and the greenery in the Martian greenhouse was super-colorful and filled with life. Even in a dark space like, you know, space, I could see the sharp details and outlines of the asteroids.

I also watched some My Hero Academia, and the show was even more colorful than I remembered, from All Might's bright red-and-blue suit to the vibrant-green electricity that surrounds Deku when he's kicking villain butt. I can't wait to watch all of Season 4 on this monitor.

There are things that definitely make me want to explode when I think about the Asus ROG Swift PG279QZ, like the lack of software and the annoying game settings that won't turn off. But overall, I couldn't be happier about the monitor itself. While a little on the warm side, the colors are vivid, which made games pop more than they otherwise would on my older monitor. In addition, the panel is also pretty bright. But, the most exciting part is that it has Nvidia G-Sync and it's clocked at a 144Hz refresh rate.

So, is buying a high-refresh rate monitor worth it? Absolutely. There's basically no point in having the best gaming laptop or PC with powerful components if you don't have a monitor with a high enough refresh rate to display those high frames that you're getting. Treat yourself and buy one!