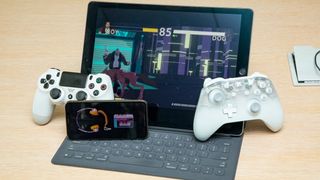 While Xbox and PlayStation wage an all-out war against each other, Apple could be gearing up to join the fight. There has been endless speculation over the years about the Cupertino giant joining Microsoft and Sony to create a proper game console, and the rumors are only ramping up.

For now, Apple's biggest gaming venture is Apple Arcade, a subscription-based service for mobile gaming on your iPad, iPhone and Mac. It's a worthy investment for casual gamers but it won't replace your Xbox, PlayStation, or Switch. However, a true gaming console rumored to use ARM-based chips, just might.

Leaker MauriQHD (via Tom's Guide), who has a fairly good track record, tweeted over the weekend that they heard Apple is working on "an ARM console." It's not much to work with, but the post suggests Apple could soon take the next step to win over a larger segment of gamers.

You should view this rumor with some skepticism because the leaker doesn't provide any evidence to the claims. And, as is usually the case, Apple hasn't made any official announcement. It's possible the word "console" means something other than a PlayStation or Xbox rival or that Apple was never really working on one.

Or, as some have suggested on Twitter, the console could be a new Apple TV, which lets you play games as well as stream TV shows and movies. The current box runs on an A10X Fusion chip and you can pair your Xbox Wireless Controller when you're gaming. The streaming device has enough graphics oomph to run mobile games at reasonable frame rates, so it's not a stretch to call it a console of sorts.

Custom ARM-based CPUs have renewed rumors about an Apple console. To get you caught up, Apple announced its plans to transition to in-house ARM-based processors for upcoming Macs as it ditches long-time partner Intel. The new chips could deliver significant performance gains over AMD GPUs or the A-series SoCs powering the iPad and iPhone.

What needs to happen first

Apple producing its own ARM-based processor is an exciting development but certain shortcomings could make upcoming Macs even worse for gaming than they were before. A-series chips aren't compatible with the x86 architecture needed to play PC and console games. Running those titles would be done via emulation or Apple would need to create a box based on x86.

There's no question that Apple has the resources and technical knowledge to design a console, but going up against the Xbox and PlayStation would be a battle not worth fighting. Those competitors have spent years and countless dollars creating ecosystems of exclusive games and content, and no amount of money can guarantee a mutiny of their dedicated fanbases.

Do we think Apple will release a game console to go up against the Xbox or PlayStation? No. At least, not anytime soon. Mobile gaming is the company's bread and butter, and that box is already checked with Apple Arcade. As for this rumored console? It's likely an Apple TV with an A-series processor capable of playing demanding mobile games at high frame rates. It might satisfy the casual gamer, but everyone else should be awaiting the release of the PS5 and Xbox Series X.