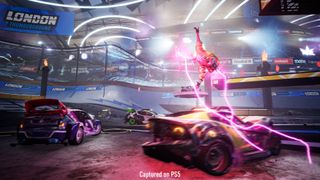 The raw power debate between the Xbox Series X vs. PS5 hardware is pretty settled. However, there are few are questioning the PS5's capability to produce amazing graphics.

But never fear. If these new screenshots released for the forthcoming PS5 exclusive Destruction AllStars are any indication, we have nothing to worry about. Destruction AllStars is a frenetic arena-based destruction derby game that made a quick appearance during the PS5 games event in June. The new 4K screenshots captured on the PS5 really drive home the kind of detail the console can deliver (via TechRadar).

Destruction AllStars comes from a solid pedigree with developers from the popular Project Gotham Racing games for Xbox and Xbox 360.  And on the PlayStation side some of the development team also worked on the much-loved MotorStorm games.

That racing prowess is mixed in with a game that looks like it is trying to capture fans nostalgic for Twisted Metal. It's also hoping to catch the slipstream of Rocket League fandom that may be interested in another car arena title.

We'll have to see if the gameplay can actually deliver on the visuals, but for now you can feast your eyes on the spectacular images that Lucid Games has put out and keep counting the days until mid-November.

Destruction AllStars isn't likely to be a system seller. However, it's a good reminder of the depth of PlayStation's lineup of exclusive titles. We'll have to see if Xbox can keep up when it takes the wraps off more of its exclusives at the Xbox Series X games event.