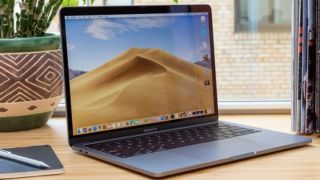 Stop! Empty your shopping cart and take your hands off your keyboard. Trust us, you don't want to buy the 13-inch MacBook Pro.

Yes, the current MacBook Pro is a great laptop. It offers tons of performance in a svelte design and the 13.3-inch Retina display is among the best we've seen on any laptop. The problem lies between the hinge and a massive trackpad: the Butterfly keyboard.

Notoriously unreliable and uncomfortable, the Butterfly keyboard was a failed experiment Apple kept alive for far too long. When it debuted in 2015, the low-profile switches were criticized for their very short travel and stiff feedback. Then bigger problems arose. Keys registered more than once, others got stuck, and some didn't show up at all. The various issues were brought to light and Apple was forced to apologize.

Year after year, small tweaks were made to the keys in a desperate attempt to improve reliability without compromising their unique qualities. But by 2018, the complaints had piled up and Apple, after getting hit with class-action lawsuits, created a free repair program for affected keys and keyboards. It wasn't until late last year that Apple conceded its efforts to fix the troubled Butterfly keyboard.

Apple hasn't confirmed whether the MacBook Pro will ditch the Butterfly switches, but the writing is on the wall. The 16-inch MacBook Pro was the first to replace the failed keyboard for scissor switches, followed shortly after by the new MacBook Air.

Critics gave Apple widespread praise for reverting to the traditional keyboard, which the folks at Laptop Mag unanimously declared the winner in a side-by-side comparison with the Butterfly keyboard. That said, we don't see a future in which the upcoming MacBook Pro doesn't feature the improved Magic Keyboard.

A reliable keyboard is a good enough reason to wait for the next MacBook Pro, but it's not the only one. Multiple rumors claim the 2020 model will pack a 14.1-inch display, similar to how the 15-inch MacBook Pro blossomed into the current 16-inch model.

Don't worry about the MacBook Pro increasing in size because it has a larger display. If Apple moves to a 14-inch (or 14.1-inch) display, it would trim down the MacBook Pro's display bezels to reduce the overall footprint of the laptop so it remains about the same size as the current 13.3-inch version.

The display on the upcoming model won't only be larger, but it could also feature mini-LED display technology. According to an investor note from reliable Apple analyst Ming-Chi Kuo, Apple will bring mini-LED to the MacBook Pro later this year. mini-LED is a relatively new technology that offers some of the same benefits as OLED --- deep blacks, vivid colors and high contrast ratios --- but at a lower cost.

We're eagerly waiting for Apple to release ARM-based MacBooks, but a custom CPU might not arrive until 2021 based on the latest rumors. If you can't wait until then, you'll at least reap the benefits of Intel's latest 10th Gen U-series CPUs.

AMD is also blazing a path in mobile with its 4000-series processors. The Asus ROG Zephyrus G14 is the only laptop we've tested (so far) with AMD's new processors, and it scored a perfect 5-star rating for its blistering performance and unheard-of battery life.

It would send a shock through the industry if Apple moved away from Intel, but there is evidence of a changing of the guard. AMD APU support was discovered in macOS Catalina code recently, hinting at the possible move. Whatever the case, the next MacBook Pro should deliver faster performance and better graphics than the current model.

We have every reason to think the MacBook Pro 2020 will be a significant improvement over its predecessor in the same way the new MacBook Air and 16-inch MacBook Pro are a big step up from the models that came before.

Even if the MacBook Pro gets the same modest changes as the MacBook Air -- a new keyboard and updated internals -- it would still be worth the wait. Add on a larger display with mini-LED technology, and the 2020 MacBook Pro could be the most improved version in the past 5 years.