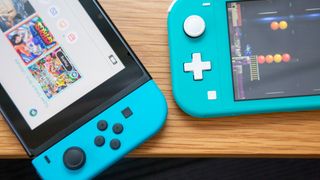 At Nintendo's 80th Annual General Meeting of Shareholders, Nintendo president Shuntaro Furukawa and director Ko Shiota were asked about the future of the New Nintendo Switch and future game consoles.

Both Furukawa and Shiota gave a glimpse of what's to come next from the next Nintendo console.

What to expect from Nintendo's new console

The exact question asked to the execs was: "Could you tell us about the outlook for your next game system? Game hardware has always displayed an image on a TV or other kind of screen while you do something, and I think that’s where the limits for this format are. Would the hardware you’re thinking about go beyond those limits?"

The answer? "Our current generation game system, Nintendo Switch, has entered its fourth year since launch, but its momentum is increasing," Shuntaro Furukawa (Representative Director and President) responded.

He continued, "We believe there are two factors behind this. First is the existence of two hardware configurations with different characteristics, in Nintendo Switch and Nintendo Switch Lite. The second factor is that Nintendo’s development resources are concentrated on developing content for a single platform, Nintendo Switch. We want to extend the life cycle of Nintendo Switch while maximizing such advantages."

That longwinded answer tells us that Nintendo isn't shying away from the portable console anytime soon, which means we may get various iterations of the Nintendo Switch before we get an entirely new system. This may be similar to how the Nintendo DS cycle of consoles was treated, although this gen will be assisted by cloud saving.

"Through Nintendo Switch, we’ve made many discoveries about where a dedicated video game platform can fit into a consumer’s daily life. We see scenes on social media of children and their families sitting around a game console to play, which gives us a renewed sense of the value of our dedicated video game platform. We will utilize these experiences in carefully considering the form our future game consoles will take."

This tells us that even when the Nintendo Switch cycle of consoles is long past, Nintendo will likely develop something that you can play at home, but still take anywhere with you on the go. I personally love that I can take my Nintendo Switch anywhere, but it's not exactly the most comfortable device, so I'm excited to see what Nintendo comes up with next to make it even better.

Stay tuned for more information in the coming, well... years, I imagine. We're definitely not getting a New Nintendo Switch this year, but maybe next year if we're lucky.