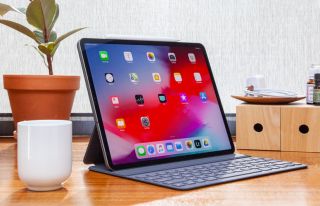 The current iPad Pro models come with 11-inch and 12.9-inch screens, which is why a new report has us feeling perplexed. That report claims the highly anticipated 2020 iPad Pro will be available with a 12-inch display.

The news of the upcoming iPad Pro potentially whittling down its footprint comes from DigiTimes -- a Taiwanese tech outlet that has an inconsistent track record of Apple product-release rumors.

"After upgrading its 9.7-inch iPad to 10.2-inch spec in 2019," DigiTimes wrote, "Apple is set to release its new 12-inch iPad Pro model featuring a rear-end three-lens ToF 3D sensor in the spring, in a bid to boost its share of the global tablet market."

Perhaps DigiTimes made a typo and meant to type "12.9-inch" instead of "12-inch." Only time will tell if Apple actually goes with a smaller display size.

The tech world is also gushing about Apple's rumored implementation of a rear-facing, triple-lens camera on the 2020 iPad Pro -- an inherited feature from the iPhone 11 series. This trio of photographic prowess should surely enhance your picture-taking experience.

DigiTimes also mentioned that a time-of-flight 3D sensor may be added to the iPad Pro's camera DNA. This mechanism heightens the device's depth perception using infrared light (lasers invisible to the human eye), which would add a new layer of technological "snazziness" to your selfies and photos.

If you're concerned about the coronavirus disrupting the upcoming launch of the iPad Pro, fear not. Although DigiTimes reported that Apple won't reach its peak production rates of the new iPad Pro model until April due to production slowdowns, the upcoming 2020 device is still expected to debut in March as scheduled.