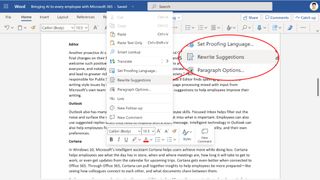 Microsoft has been rolling out a number of updates to various Office apps and services surrounding the rebranding of Office 365 to Microsoft 365 and one particularly notable new feature is for Rewrite Suggestions in Microsoft Word online.

The feature was originally announced at Microsoft's Build conference back in 2019 and previously offered writing suggestions based on selected phrases in your text, but the latest update has expanded it to cover full sentences (via Windows Central).

Microsoft Word: What does Rewrite Suggestions Do?

The goal with Rewrite Suggestions is for the software to offer you a revised version of your text that will retain your intent, but improve it on a variety of metrics based on its evolving AI.

Again the big advancement here is that this feature can now tackle an entire sentence, rather than only a single phrase. It's a tremendously more valuable feature this way, helping to clarify and punch up your ideas.

There are four types of suggestions that Rewrite Suggestions will offer you: improves fluency, concise phrasing, paraphrased sentence, and improves readability.

The goal of the feature is to make your text easier to read and comprehend without sacrificing what it is you were trying to say.

Microsoft Word: How to use Rewrite Suggestions

To use Rewrite Suggestions you need to be using Word online and have an active Microsoft 365 (formerly Office 365) subscription, but if you have those two boxes ticked it's easy to use.

Simple select the sentence by highlighting it or right-clicking anywhere within the sentence and click on Rewrite Suggestions in the resulting pop-up menu.

The Rewrite Suggestions card will then appear and present you with one or multiple options to touch up your sentence based on one of the four categories we mentioned above. Select whichever version of the sentence that you prefer and return to writing.