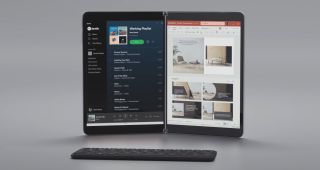 Microsoft has paused the development of the Surface Neo, the dual-screen device it originally planned to release in Holiday 2020.

According to our sources, Microsoft's decision to halt production was made in order to shift resources to other needs. We do not have a revised release date for the Surface Neo, but it is unlikely to arrive this holiday season.

Conversely, our sources confirmed that the Surface Duo, the pocket-sized dual-screen phone running Android, is on track to arrive later this year. This echos previous reports that claimed the Surface Duo wasn't affected by the coronavirus pandemic, and that it could even be released early. According to a recent Windows Central report, the Surface phone will launch next month, on the week of August 24.

While we can't say for sure why Microsoft chose to halt production of the Surface Neo, the decision doesn't come as a surprise. The Surface Neo hinges upon the successful release of Windows 10X, a simplified operating system originally designed for dual-screen and foldable devices but now launching first on single-screen laptops.

Microsoft had originally planned to release Windows 10X later this year, with the Surface Neo serving as the hero device for the OS. That now seems unlikely. ZDNet reports that the first devices running Windows 10X (single-screen laptops) will arrive in spring 2021. Dual-screen devices aren't expected to arrive until spring 2022, signaling a significant delay of at least 18 months.

Earlier this year, Panos Panay, the chief product officer for Windows at Microsoft, cited the coronavirus pandemic as a reason for why Windows 10X would shift to single-screen devices.

"The world is a very different place than it was last October when we shared our vision for a new category of dual-screen Windows devices," Panay wrote. "As we continue to put customers’ needs at the forefront, we need to focus on meeting customers where they are now."

Foldable and dual-screen Windows devices could go on without the Surface Neo or Windows 10X. All eyes are now on Lenovo as we've reached the "summer 2020" release date set for the ThinkPad X1 Fold, a foldable tablet said to run Windows 10 Pro. We went hands-on with the device earlier this year and saw potential in its flexibility. Lenovo informed us that the X1 Fold is on schedule for a 2020 release, now we're just waiting for it to arrive on store shelves.