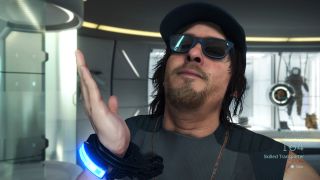 A Death Stranding PC port is on its way for everyone to experience in all of its glory. Death Stranding is arguably the most beautiful game out there right now, but which of our picks for best gaming laptops can run it?

I know we're more than excited to see the difference between the console and PC versions, but how long will you have to wait for Death Stranding to come to PC. Here's everything we know about Death Stranding PC so far.

Death Stranding PC: What the hell is it?

If you have no idea what Death Stranding is, well, neither do we. But seriously, Death Stranding, in its most basic description, is a third-person sci-fi action-adventure game.

You play as mailman Sam Porter Bridges, who is attempting to reconnect cities across America in order to rebuild society. Now, throw in some Hideo Kojima craziness, like ghosts connected to the real world via umbilical cords, babies in pods that can detect those ghosts and grenades made out of blood … and poop that can kill those ghosts. That is Death Stranding in a nutshell.

505 Games just recently announced that it's publishing Death Stranding on PC in Spring, June 2, 2020, so it's actually not too far away.

The PC release was confirmed before the initial launch on PS4, so unlike a particular company that produces a certain Western game, you won't have to wait and pray for if and when a PC port will arrive.

We don't know much about what specs are required for Death Stranding PC yet, but if Metal Gear Solid V: Phantom Pain is any indication, it won't be as taxing as you might expect. While MGSV is also ridiculously pretty, you can run it at a smooth 30 fps on low settings with just an integrated graphics card, which is impressive.

However, Kojima Productions isn't publishing the PC port. That honor goes to 505 Games. And while we do expect Death Stranding PC to be relatively easy to run on low settings, we also expect it to look insanely gorgeous.

Death Stranding PC may also offer options for ray tracing, which would allow for realistic lighting effects, but it's unclear if that'll actually happen.

You can currently preorder Death Stranding PC on either Steam or the Epic Games store.

You'll get the same pre-order bonuses you'd get with the PS4 edition, which means a ton of gold gear, like Sam's Sunglasses and his cap. Unlike the console version, the PC game will also offer those items in silver. Additionally, the armor plates and skeletons will be available in gold and silver too.

Currently, you'll find reviews for only the PS4 version of Death Stranding. However, it is incredibly controversial and divisive, despite having an aggregated score of 83 out of 100 on Metacritic.

Some people call it a walking simulator, hating on it because all you do is walk around and deliver mail, which isn't far from the truth. But others, like myself, praise it for its gorgeous visuals, wacky and deep story, and excellent implementation of its online infrastructure, which allows players to build a community of mail carriers who all help each other virtually.

Kojima Productions' recently launched PC release date trailer went over some of the differences between the PC and PS4 versions, and the most important one among them is the uncapped frame rates.

We imagine that the PC version will look better graphically. However, since the PS4 will soon become obsolete, because of the impending launch of the PS5, it might be better to hold off until the PC version debuts. But Death Stranding is so good, you might just want to get it twice.