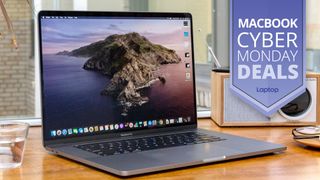 Apple makes great laptops, but their premium build gives them a premium price to match. Thankfully, Cyber Monday is finally here and with it comes huge Cyber Monday MacBook deals.

We're already seeing significant savings on the 16-inch MacBook Pro as well as the lowest prices on the 2019 MacBook Air and the last-gen model with the reliable scissor keyboard. Before you checkout, we recommend reading our Which MacBook should you buy? guide, which will give you a rundown of each model and help you choose the right laptop for your needs.

Apple is giving customers a $200 gift card with select purchases this Cyber Monday, but we expect to see much better deals from Apple-authorized retailers, like Amazon and Best Buy.

Things can get confusing with all the different models discounted at different amounts. But don't worry, we've done the hard work for you — below are the best MacBook Cyber Monday deals you can get right now.

Apple Magic Mouse 2: was $79 now $59
This wireless, chargeable mouse is a must-have accessory for MacBook users who want to optimize productivity. With its sleek looks and clever gestures, the Magic Mouse 2 is a great buy at $59.View Deal

Apple AirPods 2 (with Charging Case): was $159 now $145
Faster, great battery life and wireless charging, the 2nd-generation AirPods improve upon the originals without sacrificing the audio quality. Also, thanks to the new W1 chip, you get hands-free Siri and near-instant pairing. View Deal

Apple AirPods Charging Case: was $79 now $69
Hopefully, it doesn't happen to you, but there might come a day when you misplace your AirPods' charging case. It'd be great if you had another one just in case right? Amazon is currently selling the Gen 2 charging case, which works with the Gen 1 AirPods as well for only $69.View Deal