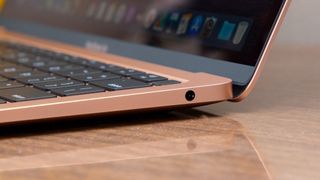 It's always fun to check the latest patents to see what crazy ideas are swimming in the heads of designers at Apple or other major tech firms. The overwhelming majority of these concepts will never see the light of day, but they give us some insight into what the company is hoping to achieve.

Based on this new Apple patent (via Apple Insider), the Cupertino giant wants to make a MacBook Pro with a bendable hinge. I know what you're thinking — isn't the entire point of a hinge to bend? Yes, but what makes Apple's idea unique is that the hinge isn't separate from the chassis; It looks like one continuous piece of metal that bends in half.

Of course, metal doesn't just bend so Apple suggests using multiple layers of "bendable material" along with mechanical couplings to establish resistance. It gets pretty technical but the general idea is that these layers can be compressed and uncompressed as the laptop is opened and closed. All the connections between the screen in the keyboard would remain intact as the hinge bends at different angles.

"The personal computing device also includes a multi-state bending assembly carried by the single-piece body at the bendable portion and positioned between and in mechanical communication with the first part and the second part."

The hinge design would need flexible displays to go along with it. That technology exists (see ThinkPad X1 Fold) but Apple has yet to reveals any plans to use it in future products. The patent also suggests a flexible screen could be built into the hinge, which has us thinking about the divisive Touch Bar.

Apart from the seamless, and frankly surreal, appearance, it's not clear what the benefits are of using a single block of metal instead of a regular hinge. The most compelling argument Apple makes is that the hinge could "also include a flexible battery."

With a more rigid design, laptop makers are forced to use fixed batteries. If this hinge allows for more flexibility, Apple could possibly fit a larger cell into its MacBooks. Then again, it will be restricted to the 100Wh capacity set by the TSA for airline travel.

There isn't anything like what is being theorized in this patent. Coming closest is Microsoft's Surface Book. Microsoft is expected to reveal a Surface Book 3 any day now, and unlike the device in this patent, that product uses the hinge to great benefit as you can attach and remove the screen from the base as you go from tablet to laptop mode.