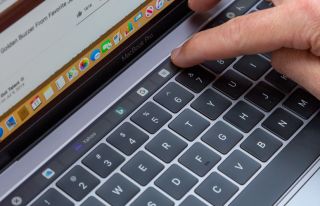 It's always fun to see what the creative minds at Apple are daydreaming about. From reverse wireless charging to a strange foldable device to a laptop with an invisible hinge, Apple's patents are like drawing boards from sci-fi film directors.

But none of the strange concepts I just mentioned hold a candle to the latest patent. Approved by the China National Intellectual Property Office on June 30, the patent describes a MacBook with five displays. Yes, you read that right, five.

Called “Dynamic Display Interface," the concept (discovered by MyFixGuide) consists of a seemingly ordinary laptop, except that on the deck are four additional touchscreen displays. Two of those panels flank the keyboard on each side while the other pair is on the wrist-rest.

Why so many screens? Based on the patent, each of these displays could be used to provide contextual information related to whatever app is running on the main screen.

In one example, a word processor is operating on the main panel while a secondary display on the bottom-right corner of the deck shows content, page, chapter, title and other summaries of the document. On the other screens are settings that can be adjusted with the tap of a finger.

You can imagine this scattering of screens being used to remove timelines and toolbars away from the main screen, similar to how the second screen works on the Asus ZenBook Pro Duo. This way, photographers and videographers can view and edit materials without anything getting in the way.

There is no trackpad although it's not clear whether the omission was to highlight the screen or if the laptop would rely on a different input. It's possible the trackpad will be embedded beneath the deck and use haptic feedback to tell you when you've reached the outer boundaries.

This all sounds pretty farfetched and, well, it probably is. Patents like this one rarely see the light of day, and if they do, they are typically watered down to the point of being unrecognizable. But that doesn't mean your multi-display laptop fantasies will go unanswered; as previously mentioned, Asus has several dual-screen laptops available today and Dell and Microsoft are both working on their own versions.

In the near-term, Mac users can look forward to Apple's shift to custom-made, ARM-based silicon. The move will have huge implications for future MacBook laptops.