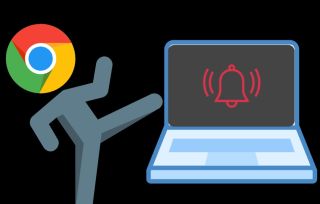 Fed up with irksome push notifications? Google hears you loud and clear. The search-engine giant will be cracking down on ill-intentioned notification requests on the next Chrome update, according to a new Chromium blog post.

Google already started taking steps to mitigate abusive push notifications with the Chrome 80 update, but with the next upgrade, Google is really putting its foot down to silence websites that have been flagged as corrupt push-notification offenders.

Why is Google cracking down on push notifications?

Egregious push-notification violations are one of the most popular user complaints Google receives about Chrome.

Not all push notifications are nefarious, though. Most websites launch well-intentioned pop ups for the sole purpose of attracting voluntary subscribers who enjoy the platform's content.

Google acknowledges that browser notifications, for the most part, are a quick and easy way for Chrome users to receive useful updates from welcomed websites, such as direct messages from Instagram or updates on your Uber driver's whereabouts.

However, there are some mischief makers on the internet who abuse the push-notification system to deceive visitors, phish for personal information or deploy malware. These are the bad actors Google intends to thwart with the upcoming Chrome update.

An example of a permission-request issue would be a website holding their content hostage until the visitor agrees to subscribe to its push-notification subscription. A scenario that would fall under the notification issues category is a website that sends out push notifications to promote malware.

Chrome will silence push notifications from websites that failed its Abusive Notification Check.

According to the GIFs embedded into the Chromium blog post, Chrome users will receive the following warning message on flagged websites: "This site may be trying to trick you into allowing intrusive notifications."

Google Chrome plans to roll out the new muted push-notification UI for suspicious websites with the Chrome 84 update, which is scheduled to be released on July 14, 2020.