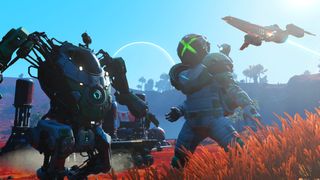 Sean Murray, the managing director of Hello Games, revealed in a blog post that No Man's Sky is finally coming to Xbox Game Pass.

Murray also unveiled that a Windows 10 version of the game is also on its way. However, it's unclear whether or not this is going to end up on Xbox Game Pass for PC.

The initial launch of No Man's Sky was rocky, to say the least. However, since then, Hello Games have launched a plethora of free updates and expansions. The company is continuing to update the game with the last update launching on April 7, 2020, which introduced Exo mechs.

In the Xbox Wire blog post, Murray revealed that there are still many more updates to come to No Man's Sky, which is surprising since the release of the Xbox Series X and PS5 are on the horizon.

It's entirely possible that we might see No Man's Sky cross generations, and if we're lucky, No Man's Sky will transition into the Xbox Series X era of Xbox Game Pass.

Stay tuned for more news about No Man's Sky and to see what's coming next to Xbox Game Pass.