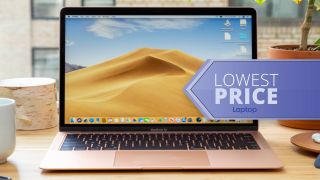 Apple's MacBook Air 2019 notebook is still one of the best Apple laptops you can buy. And for a limited time, you can grab one for its lowest price ever.

Currently, Best Buy has the MacBook Air 2019 with a Core i5 CPU on sale for $949.99. That's $350 off the MacBook's $1,299 list price and the lowest price we've ever seen for this particular model. Even better, this deal includes one year of Apple TV+ for free.

This is one of the best MacBook deals you can get right now.

The MacBook Air 2019 is one of the best ultrabooks money can buy.

In our MacBook Air 2019 review, we found its crisp, high-resolution Retina display and strong audio impressive. We wish it had more than two Thunderbolt 3 ports onboard, but we still gave it an overall rating of 3.5 out of 5 stars.

The Apple MacBook Air's 8th Gen Intel Y-series chip and 8GB of RAM are suitable for day-to-day school or work computing. In one test, we saw no stutter as we multitasked in Chrome. The Air was able to juggle 12 browser tabs, a 1080p video on YouTube, Giphy, Google Forms, Google Docs, Slack, Things and Bear text editor without so much as a stutter.

As for connectivity options, the MacBook Air packs two Thunderbolt 3 ports on its left side, one of which you'll use to charge the notebook. Also on board is a built-in headphone jack to listen to music or podcasts using a wired pair of headphones or speakers.