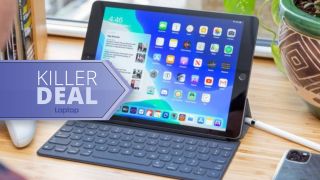 The clock is ticking on getting gifts in time for the holiday celebrations. Fortunately, we found an epic last-minute deal on a tablet that will make the perfect affordable gift for any friend or family member.

Best Buy is selling the 10.2-inch iPad for $249, or $80 off its retail price. Better yet, savings jump to $100 for the high-end configurations, and the discounts apply to both Wi-Fi and cellular models.

The savings match what we saw during most of Black Friday and Cyber Monday, so this deal is about as good as it gets.

This 10.2-inch iPad is one of the latest tablets released by Apple. In our iPad review, we gave the low-cost model props for its new keyboard support and larger display, which is both bright and vivid.

We also appreciate the improvement to battery life, which helped the 10.2-inch iPad endure for 11 hours and 52 minutes on our battery life (continuous web surfing over Wi-Fi at 150 nits). That result means you can use the slate throughout work and still have some juice left for your morning news the next day.

Yes, the 10.2-inch iPad's A10 Fusion chip is older than the processors in more expensive models, but we didn't have any problems using it to browse the web or checking social media during our testing.

With Christmas just a few days away, now is the perfect time to jump on this deal and put a smile on someone's face.