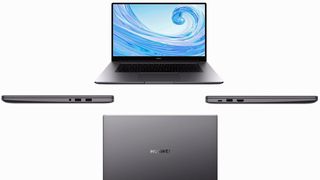 It's been an unnerving year for Huawei but now the company appears ready to take on Apple again.

Reliable leaker Evan Blass (via MSPowerUser) posted renders and specs of two upcoming Huawei Matebook laptops. What stands out about the rumored devices is that Huawei will finally offer a larger, 15-inch variant of the MateBook alongside the traditional 14-inch version.

If the upcoming MateBooks look anything like the laptops in these renders, then they'll be MacBook Pro doppelgängers, except with a much better selection of ports.

Codenamed "Bohr," the MateBook 15 has an HDMI port, a USB-C port (probably Thunderbolt 3), a headphone jack and a generous trio of USB-A ports, while the 14-inch model has the same layout minus one USB-A input.

Both laptops feature a power button with an integrated fingerprint sensor and relatively narrow bezels (with an 84% screen-to-body ratio). Interestingly, the 14-inch and 15-inch MateBook laptops appear to have 16:9 displays, not the 3:2 aspect ratio found on the MateBook Pro X.  Other specs, including the laptops' CPU, GPU, display resolution and dimensions, have not yet been revealed.

Will the new MateBook laptops be available in the US?

We don't know when these laptops are expected to go on sale, or if they'll ever be available in the United States. Huawei's prospects of ever launching a laptop in the U.S. looked dire earlier this year after the U.S. Department of Commerce blacklisted the Chinese company.

That was followed by an executive order signed by President Donald Trump blocking American companies from using telecom equipment from any firm the United States deems a threat to national security. While Huawei is considered one of those companies, the U.S. has yet to provide sufficient evidence to prove its case.

If Huawei ends up launching new MateBook laptops, it will likely reveal them in the first or second quarter of 2020 (around April). We could even get a sneak-peek at CES in January or at MWC in February.