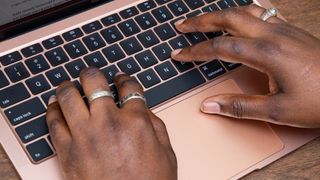 The now-extinct Butterfly Keyboard wasn't the revolution Apple once thought it was, but that hasn't dissuaded the company from coming up with new keyboard ideas.

A patent recently granted to Apple shows a MacBook keyboard that can detect the movement of fingers as they glide across a keyboard. The "finger sensing" system displays the path of your finger on the screen, so you can quickly draw shapes or lines without lifting your hand off the keys.

This is just a patent, so the chances of it arriving in the next MacBook are slim to none, but inventions like this one sometimes find their way into products in one form or another.

Apple users have pleaded with the company to add a touchscreen to their laptops so they can gain the functionality enjoyed by many Windows 10 laptop owners. The keyboard in this patent appears to be an alternative method for allowing users to quickly annotate using their fingers.

I'm not sold on making gestures above a keyboard in order to draw on your screen. But I can see the benefit of the finger sensing technology if I'm editing a screenshot or taking quick notes.

This same patent also describes a dual-screen setup with the deck acting entirely as a second screen. It looks similar to the Asus ZenBook Duo except there isn't a keyboard. Instead, a light-based button array and dial let you edit photos and videos. There might even be biometric sensors built-in to detect temperature, blood oxygen levels, and heart rate.

And finally, the concept-filled patent describes a MacBook wrist rest that doubles as a wireless charging pad for the iPhone.

I personally hope Apple doesn't do anything radical to the current scissor-style keyboard now adopted by each MacBook in its arsenal. We just suffered through years of a terrible, unreliable Butterfly keyboard -- let us enjoy a simple keyboard for a while.