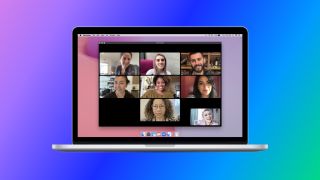 Facebook Messenger has spiked in usage over the last month (by more than 100%) along with every other major video chat app, but the company today addressed one of the shortcomings of its service by adding a standalone Messenger app for Windows 10 and macOS (via Windows Central).

The new app will let users make unlimited video calls to individuals or groups and add the familiar text chat functionality. This is obviously excellent timing, but the app has been in the works for over a year now, so let's take a look at the features the social media giant is bringing to desktop.

The standalone app makes it much easier to multitask because the service is no longer one of the numerous browser tabs you might have open. Otherwise, the desktop app mostly delivers everything from the mobile app.

As we mentioned, the basics handling group video calls on your desktop are there with the same support for up to eight participants on a call. Naturally, this will also sync with your existing chats on the mobile apps, so you can pick up your conversations wherever it's convenient for you.

Text chatting has the same support for emojis, sharing files, photos, or videos with your friends. There is still no screen sharing option, but given the family and friend focus, we're not all too surprised.

The desktop app also picks up the dark mode option.

You can download the desktop app right now from the Microsoft Store or macOS App Store.