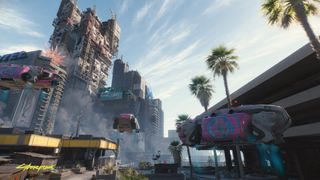 CD Projekt Red took to Twitter today to announce the exciting news that Cyberpunk 2077 will be backwards compatible with both the PS5 and Xbox Series X. If you purchase the game for the PS4 or Xbox One, you'll immediately be able to play both games on the next generation consoles once they release.

Additionally, CD Projekt Red has revealed that anyone who owns versions of Cyberpunk 2077 from this generation will be able to freely upgrade to the versions, which take "full advantage of the next-gen hardware."

A later upgrade to Cyberpunk 2077, taking full advantage of the next-gen hardware, will be available for free.June 19, 2020

This comes after the company announced that Cyberpunk 2077 would be getting delayed again, this time only two months out, from September 17 to November 19.

This is a good way to encourage players to purchase any version of the game without having to worry about spending additional money for the incredible upgrades that we expect to see within the next-generation.

Thanks to CD Projekt Red's decision, we no longer have to struggle to decide which version to buy. Although, some people will still be unsure if they want to play the next-generation version first or get started as soon as they can with current hardware.