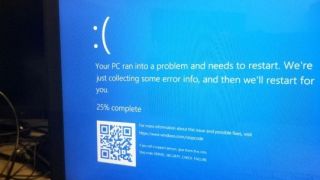 Another Windows 10 update, another series of problems. This time, Microsoft doesn't appear to be taking action.

The issues stem from Windows 10 KB4541335, a patch designed to fix bugs in Windows 10 versions 1909 and 1903. Instead, it's causing headaches for certain users who are experiencing system crashes and performance problems when gaming.

As Windows Latest reports, one user was hit with the Blue Screen of Death and received a "whea_uncorrectable_error" message.

Another Windows 10 user said they're seeing high CPU usage when their laptop is charging, and others have noticed various performance issues after applying KB4541335.

There's some good news and some bad news. The good news is that this update is optional, so if you didn't manually download it, then you're safe. This is why so few users are reporting issues. Also, it appears the majority of people who downloaded KB4541335 aren't having any problems.

The bad news? Microsoft says it's not aware of any known issues with the update, so it's possible the company isn't working on a fix.

If you're one of the unlucky ones, we recommend rolling back the KB4541335 update and reverting to a more stable version of Windows 10. To do this, go to Settings, click "Update and Security" and choose "Windows Update" from the left-side menu. From there, press "View update history" and click "Uninstall updates." Then, find KB4541335 and uninstall it.