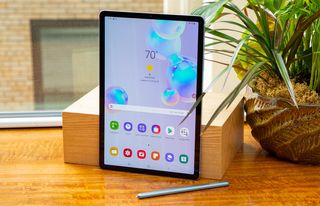 Samsung's next-gen tablets, the Galaxy Tab S7 and its big brother the Galaxy Tab S7 Plus, are slated to launch next month. As Sammobile reports, Samsung is omitting the in-display fingerprint reader from one of the tablet's specifications.

According to Sammobile's source, the Galaxy Tab S7 is expected to have a fingerprint reader baked into its power button instead. This design borrows from its predecessor, the Galaxy Tab S5e.

On the other hand, Samsung's larger and pricier flagship, the Tab S7 Plus, may include the in-display fingerprint sensor. If these rumors turn out to be true, it could give Apple's upcoming iPad Air a leg up on the entry model Galaxy Tab S7.

It's unclear why Samsung wouldn't configure both Android tablets with the in-display fingerprint sensor, although it probably comes down to price. The biometric technology currently exists in a host of Samsung devices, like the Galaxy S20 and Note 10.

This missing security feature is probably not a deal-breaker for potential Tab S7 owners, but it's certainly a nice tool to have (if it works reliably). Samsung is expected to announce the new Galaxy Tab S7 tablets at its Samsung Unpacked virtual event on August 5.