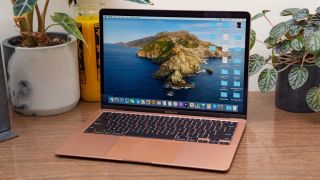 We know Apple has plans to release its first ARM-based Mac later this year, but a new report suggests we might get a double feature before the end of 2020.

According to DigiTimes (via TechRadar), Apple will launch both a 13-inch MacBook Pro and a new MacBook Air with custom CPUs by the end of this year.

"As Apple is set to release 13-inch ‌MacBook Pro‌ and ‌MacBook Air‌, powered by Apple Silicon, by the end of this year, total shipments of MacBook lineup are expected to reach 16-17 million units in 2020 compared to 14.5-15.5 million units shipped a year earlier,” the report reads.

These claims echo those of reliable analyst Ming Chi-Kuo, who said the ARM-powered MacBook Pro would hit mass production in Q4 of this year while the MacBook Air would either arrive at the end of 2020 or the start of 2021.

While Kuo leaves open the possibility of the MacBook Air slipping into next year, DigiTimes seems confident that it will arrive within the next six months. DigiTimes doesn't mention the 16-inch Pro model or a 14-inch MacBook Pro with ARM-based chips but it's worth repeating Kuo's prediction: both will arrive in 2021.

Shifting back to DigiTimes, the site said a 10.8-inch iPad would arrive in the second half of 2020. Previous rumors claim the next version of Apple's cheapest tablet will be even "more affordable" and yet powered by an A12 chip.

We've heard all sorts of rumors predicting Apple's plans for releasing its forthcoming MacBooks powered by Apple silicon. According to TrendForce, the new chips will allow Apple to reduce the price of the MacBook Pro and MacBook Air, although we're not so convinced. Another interesting rumor claims Apple will combine the MacBook Pro and MacBook Air into a single product called "The New MacBook."

However Apple decides to approach the ARM-based era, we'll be here to bring you all the latest MacBook news, rumors and leaks.