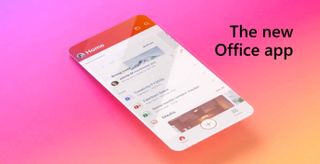 All for one, and one for all! Why have your word processor, spreadsheet and presentation software separated when you can merge the Three Musketeers of productivity into one program? Microsoft has finally answered our prayers by launching an all-in-one app that consolidates Word, Excel and PowerPoint.

The new Office app was first released to 10,000 users back in November for beta testing using Apple's TestFlight program. Feedback received from the sample of users compelled Microsoft to add third-party storage services (e.g. Dropbox, Google Drive, and iCloud), and implement templates for new documents, spreadsheets and presentations, as well as other performance enhancements.

The new Office app is currently available to all Android and iOS phone users, and Microsoft has plans to fully optimize the app for tablets, although the new all-in-one software currently only offers limited support for Android tablets.

The best part of this Microsoft Office debut is that it's mostly free.

"The app is free to use, even without signing in. However, signing in with a Microsoft Account or connecting to a third-party storage service will enable you to access and store documents in the cloud," Microsoft wrote. "An Office 365 or Microsoft 365 subscription will also unlock various premium features, consistent with those in the current Word, Excel, and PowerPoint apps."

According to Microsoft, the new Office app boasts the following features:

Microsoft also plans to integrate useful features into the Office app in the coming months, including transforming voice into digital text, framing Excel sheets into a more convenient format for devices, and optimizing PowerPoint for users seeking a quick way to create outlines.

The tech giant is still planning to keep Word, Excel and PowerPoint as individual apps for users who prefer standalone versions.