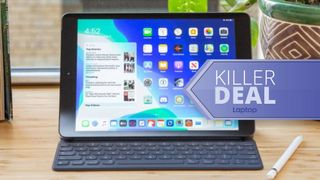 The killer iPad deal of Black Friday is back.

Best Buy is selling the newest iPad (10.2-inch) for $249, or $80 off its retail price. This matches the lowest price ever, which was briefly active on Black Friday.

Best of all, these steep discounts apply to all iPad configurations, including 32GB and 128GB models with both Wi-Fi only and LTE support.

The 10.2-inch iPad is the best tablet for most people. In our iPad review, we praised Apple's least expensive slate for its bright display and long battery life, both of which are improved over the previous model.

Apple went a step further and increased the size of the iPad's display, so you now get a better viewing experience when you're streaming movies or watching YouTube videos. We're also happy to see that the 10.2-inch iPad supports the Smart Keyboard for those who need to increase their productivity.

We don't know how long this price cut will last, but we'd be surprised if it's around for long. That said, if you're in the market for a budget tablet, you won't find a better deal than this one.