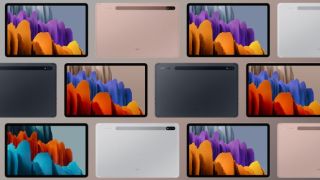 Samsung is expected to reveal the Galaxy Tab S7 tablet on August 5 at its Galaxy Unpacked event, but it won't be much of a surprise thanks to a flurry of reliable leaks.

The latest divulges almost everything there is to know about the two versions of this upcoming flagship Android tablet. Published by Roland Quandt of the German tech site WinFuture, the leak reveals that the 11-inch Galaxy Tab S7 will have an LTPS TFT display while the 12.4-inch Galaxy Tab S7 Plus will flaunt an AMOLED panel.

Both screens will support a 120Hz refresh rate but the 11-inch screen will actually get brighter, at 500 nits versus the AMOLED's 420 nits. Don't let that fool you. AMOLED is a superior display technology that enables darker black levels and higher contrast.

On the inside, these high-end Android tablets will be powered by a Snapdragon 865 SoC with 6GB of RAM and either 128GB or 256GB of storage. Another highlight is the optional 5G support, which should enable superfast connectivity when you're away from home.

Going back to their similarities, both tablets will have dual 13-megapixel and 5MP rear-facing cameras along with a single 8MP selfie cam. And both models will be available in Mystic Black, Mystic Bronze and Mystic Silver. It's also worth pointing out that they will run Android 10 with DeX, Samsung's own desktop interface.

Both tablets have slim display bezels so your eyes are drawn to their large panels. They are both made of metal and have sound tuned by AKG (which Samsung acquired when it purchased Harman).

If this leak is accurate then Samsung is clearly very confident in its lineup of tablets as it appears to be directly challenging the iPad Pro. The big question now is how much these tablets will cost and whether Samsung dares to get close to the exorbitant price of the iPad Pro.

We'd be surprised if Samsung didn't reveal the Galaxy Tab S7 and Galaxy Tab S7 Plus at its Unpacked event on August 5, so check back in with us for official specs, photos and (fingers crossed) pricing and availability.