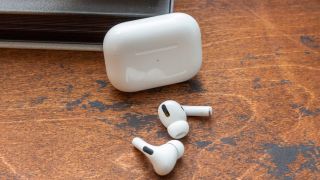 Rumors about a new lower-priced AirPods Pro started circulating last month, and today we have a new report indicating that they could go into production by early Q2. These reports are again coming from Digitimes (via MacRumors) and are based on sources from chip and component suppliers.

This timeline would indicate production starting later this month or early April with the release to follow.

This lines up pretty closely with rumors of Apple AirPods X over-ear headphones coming soon. Also, it's been almost a year since the release of the AirPods 2 (2nd generation AirPods) so the timing is right for a refresh.

Currently, the AirPods Pro are $249 and the standard AirPods with a wireless charging case are $199, which doesn't really leave enough room for an option in between them. The most likely resolution is that the cheaper AirPods Pro takes over that $199 price point. This would seem like a fitting price if speculation is correct that they are essentially identical to the AirPods Pro, but lack active noise cancellation.

There are no details to speak of at the moment regarding what this would mean for the standard AirPods. The hope would have to be that it carves out a slightly lower price point for those options, although given the dominance of the AirPods in the market, particularly among Apple users, there isn't a strong motivation for Apple to do so.

We'll continue to keep you updated with the latest rumors, but we shouldn't have to wait much longer for the announcement if Apple stays on schedule.