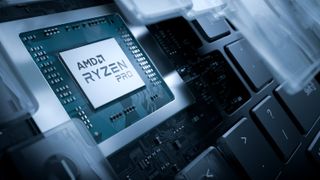 The new 7-nanometer processors operate at a TDP of 15W, which means they are equivalent to Intel's U-series processors and meant for ultra-slim business notebooks.

Let's toss the numbers aside for a second and ask the question on every IT admin or enterprise user's mind: How does Ryzen Pro 4000 compare to Intel vPro and 10th Gen Intel CPUs? We won't know for sure until we test business notebooks running on these chips, but the numbers AMD is throwing around look encouraging.

AMD wasn't shy about putting its business-focused chips up against Intel's new 10th Gen processors. I want to pause for a second to remind you that Intel hasn't yet released 10th Gen vPro CPUs for enterprise notebooks, so this isn't a perfect apples-to-apples comparison.

Still, AMD didn't cut corners with the comparisons it provided us. It put the Ryzen 7 Pro 4750U against an Intel Core i7-10710U processor, the most powerful 15W TDP chip in Intel's arsenal. Based on AMD's tests, the Ryzen 7 dominates with 25% better performance on the Geekbench 5 overall performance test (we use this benchmark in our reviews).

The Ryzen 7 Pro 4750U created an even bigger gap against the Core i7-10710U in the Cinebench nT, PCMark 10 Digital Creation and Passmark 9 CPU benchmarks. The only benchmark the 10th Gen Intel chip won was the Cinebench 1T test and by just 2%. But again, these were tests chosen and performed by AMD.

We also got a glance at how the mid-tier Ryzen processor performs against 10th Gen Core i5 processors, and the rift in performance only widens.

On the Geekbench 5 test, the Ryzen 5 Pro 4650U crushed the Core i5-10210U CPU with 86% faster performance. Similarly, the Cinebench nT test favored the AMD by 97% and on Passmark 9 there was a 76% gap in favor of Team Red. None of the tests AMD provided had the Core i5 on top.

Let's take a look at how the new Ryzen Pro 4000 chips compare to the previous 3000-series processors.

Synthetic benchmarks only tell half the story. In real-world tests provided by AMD, the Ryzen 7 Pro 4750 provides 77% faster speeds than its predecessor when running Microsoft Excel. Microsoft Edge runs 39% faster, Powerpoint gets a 27% speed boost and there is a 19% jump year-over-year when you're writing essays in Word.

Intel's vPro chips come loaded with features meant to secure notebooks and help IT admins deploy and manage fleets of laptops. Now AMD wants businesses to know it has its own solutions.

AMD is focusing on three areas with its Ryzen Pro chips. The first is security, which is achieved via a "multi-layered" approach that includes a modern architecture, memory encryption and tools from third-party laptop vendors.

The next is manageability, with AMD promising simplified deployment and management of laptops across an entire workforce. It gets help from Microsoft Endpoint Manager.

And lastly, there is what AMD calls "Business Ready," which essentially promises long-term reliability and support.

More power is only useful if it doesn't eat into the efficiency of a machine. With the Ryzen Pro 4000 chips, AMD is promising huge improvements to battery life for business machines. The company says notebooks can last up to 20 hours on a charge with the Ryzen 7 CPU.

It achieves those long runtimes with 2x more performance-per-watt along with some smart new features, like better idle detection and a reduced energy penalty when you switch power states.

We'll get a much better idea of how these chips affect real-world battery life once we get review units running Ryzen Pro 4000 CPUs.

AMD didn't specify exactly how many business systems would run on its Ryzen Pro 4000 chips this year, but it did name-drop a half-dozen models from Lenovo and HP.

Of the major business laptop brands, Lenovo is taking the biggest jump with AMD by offering five new laptop models. Those include the ThinkPad T14, ThinkPad T14s, ThinkPad X13 and ThinkPad L14 and L15.

We'll provide full specs and features for these laptops when they become available.

We'll need to get our hands on a laptop running AMD's new Ryzen Pro 4000 processors before we can make an definitive conclusions. But our expectations are through the roof based on what AMD is showing us.

If these performance metrics hold up in our benchmarks, and laptops with Ryzen Pro an actually last 20 hours on a charge (we'd take 15 hours), then Intel could be in for a long year.