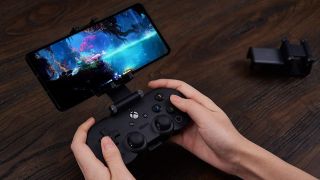 Microsoft has partnered with 8BitDo to create a controller specifically developed for its cloud-gaming service, Project xCloud. To me, it already looks too tiny and too expensive. I want it, but I hate it. I have mixed emotions.

8BitDo is launching its Xbox Cloud Gaming controller on September 21, 2020 for $44.99, which is a major turn off when you consider that an official Xbox One controller costs $64.99 at MSRP.

I could be wrong, and it could be super comfortable and worth its price. After all, 8BitDo included separate software that lets you button map and adjust the stick and trigger sensitivity, which is neat. And similar to the Xbox Elite controller, it supports profiles that you can switch between, so it might have more value at first glance.

However, we won't find out how good this controller is until September rolls around, which might be closer to when Microsoft dives deeper into its cloud gaming endeavor.