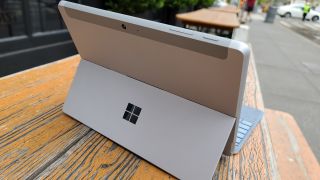 Goodbye, 32-bit Windows. Microsoft announced earlier this week that 32-bit builds of Windows 10 would be phased out, and new laptops will only operate on the 64-bit version.

"Beginning with Windows 10, version 2004, all new Windows 10 systems will be required to use 64-bit builds and Microsoft will no longer release 32-bit builds for OEM distribution."

If you're unsure of the difference between 32-bit and 64-bit systems, don't worry, you probably won't be affected by the change to Microsoft's minimum hardware requirements. That's because Microsoft will continue to support existing 32-bit PCs with feature and security updates released through non-OEM channels.

You also shouldn't worry about a new laptop losing support -- every Windows 10 laptop released in the past few years is a 64-bit system. To find out if your laptop is 64-bit or 32-bit, search "system information" in Windows Search. On that screen, look for "System Type." Here, you'll either see x64 (64-bit) or x32 (32-bit).

There's no promise for how long Microsoft will continue to support 32-bit systems, and we wouldn't be surprised if they were phased out altogether in the near future.