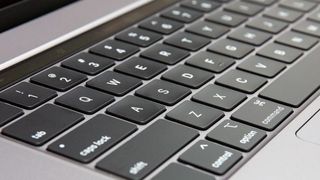 When Apple unveiled the new 16-inch MacBook Pro last week, the company touted its hefty power, slightly larger screen, and improved Magic Keyboard. But a new teardown from iFixit suggests it might also come with an exceedingly difficult-to-fix design.

The folks over at iFixit on Tuesday (Nov. 19) tore the 16-inch MacBook Pro apart to find out what’s living under the hood. They found the LED-backlit 16-inch display with a resolution of 3072 x 1920 and their model came with Intel’s Core i7 processor with a 2.6GHz clock speed. The model they tested also featured 16GB of memory and 512GB of storage.

The first thing iFixit analyzed was the MacBook Pro’s new Magic Keyboard. After years of complaints about Apple’s Butterfly keyboards, the Magic Keyboard promises to deliver better comfort and reliability.

That said, iFixit found that like the Butterfly keyboard, the Magic Keyboard isn’t all that simple to fix. In a less-than-appealing move, Apple riveted the keyboard to the frame, so actually repairing the keyboard by extracting it will be impossible.

Aside from that, the teardown experts at iFixit found a keyboard with a backlight assembly and a rubber dome for more responsive key presses. Another big difference between the Magic Keyboard and Apple’s long-criticized Butterfly Keyboard? The Magic Keyboard is slightly thicker by 0.22mm — a necessity, perhaps, because of the new design.

Moving on from the keyboard, iFixit found that the MacBook Pro’s internal design is actually quite compact with curved logic boards to make everything fit. On the motherboard, Apple fit everything from its processor to its GPU. It even handled its memory and storage, among other components. And it did it all in a strangely curved and cut-out design.

But like any other iFixit evaluation, this teardown was ultimately conducted to determine how easy the MacBook Pro is to fix. And unfortunately, you won’t find much in the way of repairability in this laptop.

Overall, iFixit awarded the machine with a 1 out of 10 on repairability. The machine’s rating was hurt by its components largely being soldered to the logic board. The folks at iFixit also balked at heavy glue and rivets usage on key components, like the keyboard, battery, and speakers. And with a Touch ID sensor that doubles as the power switch, repairing it won’t be simple.

In our 16-inch MacBook Pro review, we gave Apple's new laptop 4.5 out of 5 stars thanks to its drastically improved keyboard, immersive display and blazing performance. But like previous MacBooks, this isn't a laptop you'll be able to repair yourself.