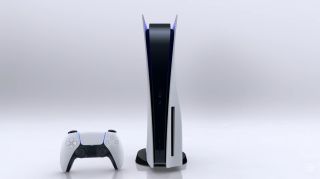 Yes, this is what the PS5 console looks like. (Image credit: Sony)

The PS5 console has been revealed!

When the DualSense controller was unveiled in April, a wave of digital creators used the blue-and-white gamepad as a blueprint to forecast what the PS5 console could possibly look like. One talented Italian-based artist nearly nailed it. But first, let's take a look at the real PS5 design.

Over a million fans tuned in to Sony's Future of Gaming virtual event on June 11, and the gaming giant had the world on the edge of its seat as Playstation showed off highly anticipated game trailers, including the Horizon Zero Dawn sequel, Spiderman: Miles Morales and NBA 2K21.

At the tail-end of the event, the glorious PS5 console finally rose out of Sony's hush-hush hell and saw sunlight.

Luminescent blue hues, much like the accents on the PS5 DualSense controller, emanate from an obsidian-colored segment that's sandwiched inside a futuristic white shell. It's unlike any console we've ever seen before. And there will be two of them -- Playstation 5 and Playstation 5 Digital Edition. The latter is not equipped with a disc drive and will solely support digital downloads.

As the PS5 hype electrified the gaming realm, 3D artists from all around the world created stunning PS5 console renders that wowed fans. Popular French YouTuber VR4Player, for example, showed off an all-black PS5 concept that had many crossing their fingers that such a masterpiece could one day grace their gaming rooms.

But LetsGoDigital 3D artist Giuseppe Spinelli, also known by the moniker Snoreyn, stood out of the crowd with a PS5 console concept that is the closest to Sony's real design. It's different, of course, and it has Spinelli's unique touches, but the design is reminiscent of the real PS5 console, including the black inner core and white outer shell.

Spinelli even included the luminescent blue hues on the console. If the white shell on Spinelli's 3D render protruded like the horns-esque design on the real PS5, we would have heralded him as our new Playstation console prognosticator.

Even Spinelli himself tweeted about how close his design is to the PS5 console: "From a [point-of-view], I got really close with my design. I don't like how they applied the CD-drive there." Spinelli felt that the real PS5 is too asymmetrical, so he redesigned the console to make it more visually balanced.

Laptop Mag asked Spinelli to give us more details about his thoughts on the PS5 reveal: "I like the double LED and how they made it," he said. "The LEDs are the best part, but I don't like the double color at all. I need to get used to it.. I still can't believe it's the PS5, so strange."