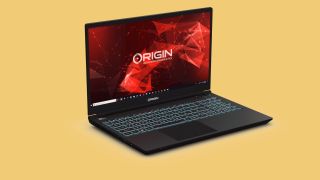 Origin is bringing back the EVO15-S gaming laptop and launching it alongside a workstation designed for business users.

The EVO15-S and NT-15, the first Origin laptops with Intel Core 10th Gen processors, pack up to a Core i7-10875H CPU (8-core, 16-thread) and RTX 2080 Super graphics, which should make them among the most powerful laptops around. They also come with a number of display options, including an OLED panel, and Origin promises the laptops will last long on a charge.

When we last reviewed an EVO15-S in 2018, it relied on 8th Gen Intel processors and GeForce 10-series graphics. A lot has improved since then and these new Origin models embrace the changes.

It starts with the 15.6-inch display, which is available as a 1080p, 240Hz panel for gamers who need fast refresh rates, or a 15.6-inch, 4K OLED (60Hz) for photographers, videographers or Netflix bingers who need the very best picture quality. There is also a 1080p, 144Hz panel if you're on a tighter budget.

The EVO15-S' keyboard is per-key RGB backlit and the port selection is great. You get three USB 3.2 Type-A ports, a Thunderbolt 3 input, a Mini DisplayPort, an HDMI, a microSD card and an Ethernet (RJ-45) port.

Gamers will appreciate the extra performance offered by the 10th Gen Intel chip, but what about graphics? There's no shortage here, either. The EVO15-S and NT-15 can play the latest AAA games at Ultra settings thanks to their Nvidia GeForce RTX 2080 Super graphics card.

Other features coming to the EVO-15S include Sound Blaster Atlas speakers, custom HD UV printing on the lid and Wi-Fi 6.

We're waiting for Origin to share pricing and availability for the EVO-15S, but given the specs, we're excited to see how it compares to other gaming, and even laptops meant for creators, like the MacBook Pro.